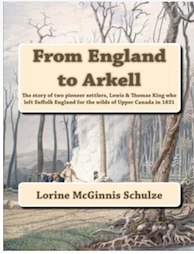 One of my more recent immigrant ancestors was Thomas King. Thomas, his wife Harriet, their son David and Thomas' brother Lewis King left Suffolk England circa 1831 for North America.

Lewis and Thomas were born in Wenhaston, Suffolk England. In 1817 the brothers married and began raising their families but in 1831 they decided to settle in what was then the wilderness of Upper Canada (present day Ontario). Joining a small group of Englishmen, they sailed to New York and then crossed into Canada. Once in Upper Canada (now called Ontario) they established a new settlement called Arkell, named after the leader of the group. Descendants of the two pioneer brothers settled mainly in Michigan, Ontario, Australia, and Alberta.