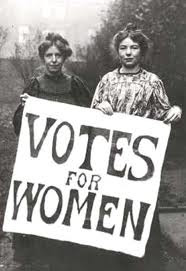 2016 is the 100th Anniversary of Women first obtaining the right to vote in Canada. Manitoba, Saskatchewan and Alberta were the first Canadian provinces to grant women this right. Canadian women who owned land however had the right to vote as early as 1791 but that right was taken away in 1849.

It was not until 1917 that British Columbia and Ontario followed suit and granted women the right to vote. I wish I knew if either of my grandmothers, who lived in Ontario, were involved in the struggle for women's rights, or at the very least were pleased with their new-found rights! But it is not something I thought to ask about when I was a young teenager.

I have talked before about Canada's Famous Five, that group of 5 courageous and determined women who forced Canada to recognize women as "persons" in 1929.

You can read more about women's rights in Canada at A greater sisterhood: the Women’s Rights struggle in Canada