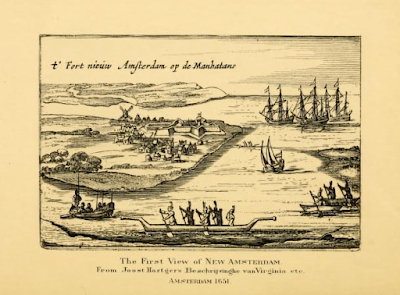 My 9th great-grandfather Christian Barentsen Van Horn was in New Amsterdam (present day New York City) by 1653. In 1655 he was among the Dutch who sailed with Peter Stuyvesant from New Amsterdam to the South River, the Dutch name for the Delaware, and captured the Swedish settlements there.

Christiaen Barents, or Barentsen, a carpenter, came from Hoorn, in North Holland. with his wife, Jannetje Jans, and one child, it is supposed, in or perhaps previous to the year 1653. On August 3, of that year, he had a child, Cornelis, baptized in the New Amsterdam Dutch Reformed church. Another son, Jan, was baptized in the same church, March 18, 1657.

In 1657 Christian began selling the property he had acquired in New Amsterdam. Christaen Barentzen was admitted, April 17, 1657, to the Small Burgher right of New Amsterdam. He bought a plot of ground, February 17, 1654, on the west side of Broadway, opposite Wall street. Christiaen sold the premises, or a part thereof, Nov. 17, 1657, to Cornelis Pluvier, for 1616 guilders 13 stivers in cash, and a mortgage for 1233 guilders 7 stivers, or about $1,140.

In 1658 he, with others, were building a mill near the present Wilmington, Delaware. His sales of land, November 17, 1657, and May 30, 1658, were probably with a view to settling permanently on the Delaware, whither he appears to have removed in the latter year, and presently we find him engaged in building a mill in the City of Amsterdam's unhappy Colony of Nieuw Amstel. Before he could complete the work he was seized with the fatal malady which swept through the settlement that summer, and from which he died July 26, 1658.

Jacob Alrichs, Vice Director of the Colony, sent word of the death to the Orphan Masters at New Amsterdam, with an inventory of the estate, and the request that his widow might be assisted. A petition presented by her to the Director-General and Council in relation to the estate of her deceased husband was by them referred to the Orphan Masters, the order bearing date the day of her second marriage.

On 12 Dec. 1658 in New Amsterdam, Jannetje married Laurens Andriessen Van Buskirk. For the next year or more, Laurens and Jannetje attempted to secure a final settlement of Christian Barentsen's South River estate without full success. Soon the Van Buskirks, and her Van Horn sons, moved Ito New Jersey where in 1662 Laurens purchased land on Bergen Neck, south of the present Jersey City.

I also have ancestors who arrived in New Amsterdam about the same time. It is fascinating reading up on the settlements and why and how the people arrived there. What a great job you've done on researching your Christian Barentsen. The name sounds familiar so I must have read about him doing my research. I found the dutch naming patterns rather confusing to pick up on and noticed he dropped the Van Horn. Is that part of the name an indicator for where he came from, or was that done for convenience once he reached the states?

Christian appears to not have used a surname. He used his patronymic. Surnames came in later and it appears his children adopted "Van Horn" as their surname. You can read about patronymics (and you will need to in order to understand where to look for your Dutch ancestors' records) at Understanding Patronymics on my website.

An even older city plan of Hoorn: http://www.frankossen.com/hoorn.jpg