Sometimes researching an elusive direct ancestor requires leaps in other directions - such as researching others who may or may not be siblings. My elusive 2nd great-grandmother Fanny Downey (born circa 1820-130 in Ireland) is such an ancestor. In trying to find out the names of Fanny's parents and her birth location in Ireland I have researched other Downey individuals who either lived near her in Ontario or had some kind of relationship to her.

I first stumbled on John Downey in the 1851 census for Eramosa Township, Wellington County Ontario. He was visiting Patrick Downey who was a schoolteacher living near my Frances (Fanny) McGinnis nee Downey. Over the next few years I researched Patrick Downey and his family thoroughly, in hopes of discovering a relationship to my Fanny Downey McGinnis. I found nothing to either prove or disprove that Patrick Downey and my ancestor Fanny were related. I did find many connections, but nothing conclusive.

So I turned back to John, the visitor in Patrick Downey's household in 1851. In that year, John was 24 years old, born Ireland and had a wife Mary age 24 also born in Ireland, and a daughter Margaret age 1 born in Canada. Patrick and his wife Barbara lived in the Public School House on Concession 1, Lot 5 in Eramosa.

The 1881 census for Guelph Ontario showed John, age 55, a Miller, visiting his brother Patrick once more. Where was Mary? Was little Margaret born circa 1850, married? Did John and Mary have more children?

The 1891 census was not conclusive. There was a John Downey but he was living in the wrong location, had the wrong wife (of course he could have remarried) and was the wrong religion!

In 1901 I found him in Guelph, noted as an Indigent. His date of birth was recorded as 14 February 1826 in Ireland, and his immigration year as 1843. He was also recorded as Catholic which was correct. He was noted as single. Had Mary died or left him? 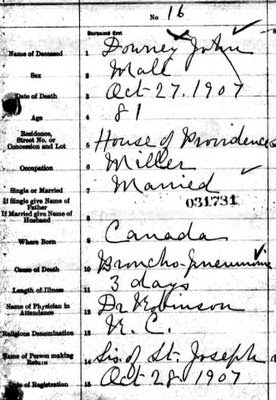 His death is recorded in the Ontario Vital Statistics on 27 October 1907 in the House of Providence in Guelph. He is noted here as being married. His occupation is noted as miller so we know it is the correct John. Unfortunately no mention of parents was made and the informant was not a relative.

I knew from my research of Patrick Downey (John's brother) that Patrick began teaching in Adjala Township, Simcoe County, in 1842. There was a large Downey family living there but whether or not they are related I do not know at this time. On 2 January 1845 Patrick Downey was hired as a teacher in Eramosa Township, Wellington County, Ontario in School District #1. Perhaps his brother John joined Patrick in Simcoe County in 1843. If so that would be another research avenue still to explore.

John's brother Patrick died in Renfrew Ontario on 20 Sep 1901, too early for parents' names to be recorded. My ancestor Fanny (Downey) McGinnis died in Morriston, Puslinch Twp Wellington County Ontario on 07 December 1904. No parents names were recorded. One more Downey can be added to the picture - Margaret Downey who married Fanny Downey's husband's brother Daniel McGinnis.

Margaret Downey and Daniel McGinnis have also proved to be elusive. I found a record of Daniel owning land in Puslinch Towship in 1847, but the first record of him in the census is in 1871 in Oxford County, Blenheim Tp. Ontario. He and Margaret baptised little Margaret in 1858 in Church of Our Lady in Guelph, where he is recorded as living in Plattsville, Bleinham Tp Oxford Co. By 1880 Daniel and Margaret are in Lapeer, Michigan. They are recorded in later census records as having had 8 children, but I have only found the names of 3! Margaret Sr died in Michigan on 31 December 1907 and her death record records her parents as Matthew & Catherine Downey.

Patrick Joseph Downey was born 17 Mar 1820 possibly in Cork Ireland. He was in Ontario before 1842. He was a well known figure in the Guelph area and the first Separate School Teacher ever hired. Left Guelph for Renfrew Ontario circa 1894 and died in Renfrew in 1901.

John Downey known to be Patrick's brother, born 14 February 1826 in Ireland, immigrated to ontario circa 1843, worked as a miller, died impoverished in 1907 in Guelph

Frances (Fanny) Downey born circa 1820-1830 in Ireland, died 1904 in Morriston (near Guelph) Ontario. Married Joseph McGinnis and immigrated to Guelph area of Ontario circa 1847

Margaret Downey born February 1824 in Ireland, married Daniel McGinnis. Immigrated to Guelph area of Ontario circa 1848. Left Ontario for Michigan circa 1880 and died in Michigan in 1907. Parents Matthew & Catherine Downey.

Were these four Downeys related? Or was their proximity throughout their lives in the Guelph area, a co-incidence? I feel my search may never end!
at January 15, 2009

Wow. What a story and what a mystery. Sure hope you eventually discover whether or not there is a family connection. Keep us updated!

I have a Julia Downey that married a John Tobin in Guelph, Ontario in 1852. would like to talk to you about the Downey's. my email is rstobin@santel.net thank you

Hey there,
I was wondering what you could tell me about the "large Downey family" living in/near Adjala?
I'm researching David John Downey and Mary Florence Collier, and I myself am a Downey.
Please email: shannynd@hotmail.com

I don't have that research anymore. I wrote this blog post several years ago

Was your David Downey in Adjala?