A Genealogy Board Game for Children - Part 1

Well it's that time of year again. Every summer my two oldest grandchildren (ages 10 and 12 this year) come for a week's visit. And every summer for the past 5 years I have come up with a new Genealogy activity for them.

We've done a Genealogy Cemetery Hunt) (looking for a specific ancestor's tombstone that I know is in the Cemetery). They love that one!
We've done Ancestor Cards for Children. In this one I created a deck of playing cards with ancestor's photos and brief biography on each one. They seem to love that one too.
We've done lots of other genealogy activities such as Making a Genealogy Time Capsule part 1 and creating a Genealogy Remembrance Garden,  but this year I needed something new. A few weeks ago I decided to make a Genealogy Board Game. I'm really pleased with how it's progressing and want to share it with readers. You might want to create one for your children or grandchildren too.
Because this Genealogy Board Game is a work in progress I'm going to start at the beginning and guide you through my thought processes, my brainstorming sessions with hubby, and my trials and errors. So over several blog posts I'll walk you through and show you photos of my progress. Of course ideas and suggestions from readers are always welcome!
The first thing I did was decide what I wanted to happen during the Board Game. How could I work Genealogy and learning about their ancestors into throwing dice and moving a token around a board of squares? What would the objective (end result) be? What would happen along the way? What would I call the game?
First things first. After a few days of brainstorming and thinking I decided that the game would consist of moving a token around the board (easy part!) and every square landed on would require that a card be taken. Cards would have either a postitive (move ahead, collect money, etc) or negative (lose a turn, go back, pay money) impact on the player.
Pretty basic standard board game procedure so far. But I would be applying a genealogy twist. Every card would have something to do with our ancestors. For me, the cards were the easiest part of the game! I knew exactly what types of penalties or rewards I would have on each one. So I confess that I created my cards before I created the board or decided on the method of moving around the board or the end result.
I don't want to get ahead of myself so let me pretend that I created the physical board first (I didn't, it came much later in my thought process). I bought 2 big pieces of white bristleboard. One is for my board prototype. The second piece of bristleboard (if I use white - who knows, I might switch to a coloured piece of board) will be for the finished product which will be carefully glued or fastened down and then laminated.
I wanted to create squares for the board but ended up creating rectangles for no reason other than ease of creation and room to add text. I tried several methods for square creation. Remember this is trial and error!
I created squares with text. I created blank squares. I created squares of different colours. I created identical squares. In short, I tried at least 10 types of squares before deciding to start with blank identical squares. I would create my text squares later after getting a visual feel for the layout of the board. 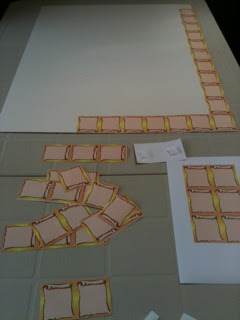 Using a very old program called PICTURE IT! I created blank squares that look like old scrolls. I chopped them with my paper cutter and started taping them down. They didn't fill the white bristleboard evenly but no problem - I cut the edges off the bristleboard to make it even with the end of the squares.
Here is a photo of my squares and the start of taping them to the bristleboard.
Next I decided where HOME would be. I then created a HOME logo, cut out four identical ones and taped them down on the board.
Next came four small squares for each HOME area, leading from home to the outside edge of the game board. I used four different colours and will eventually have four tokens matching those colours. So each person playing the game will have their own colour. 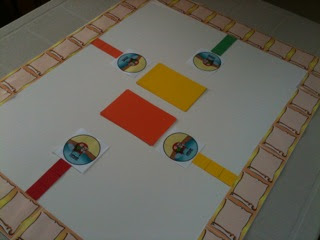 In order to decide on physical placement of items on the game board I quickly cut out (using my paper cutter) coloured card stock to represent the two piles of cards I will be creating. These cards as you can see from the next photo, will go in the middle. I will explain what these piles are in another blog post when I talk about the actual cards. But for now let's concentrate on the game board which was a really interesting evolutionary item to create.

I use the term evolutionary because I changed the layout several times. I ended up keeping these squares (but added squares with text which you will see later) and so far I've kept the HOME logos (although I have a feeling I'll change those). But I changed the small coloured squares leading out from HOME to the game board squares. You'll see what I did in another post on this topic.
I have slightly over two weeks to finish (gulp!) so I have quite a bit to do and may have to take a few shortcuts but I'm pretty sure the grandchildren are going to love this game. And boy are they going to learn a lot about their ancestors! I call it Genealogy brainwashing and I'm not ashamed to use it.
Hint: That's where the Reward or Punishment cards come in. I'm not calling them Reward or Punishment of course, but I'm not going to tell you yet what titles I came up with. I'm very excited about this Genealogy Project and I'm having way too much fun making it! So stay tuned for Part 2 of my Genealogy Board Game for Children
at August 06, 2010

very interesting. i have been wanting to do this for awhile and i await your next steps with baited breath!

Very Clever! Looking forward to see the finished game and hearing about the fun you have with the grandkids.

This is really a great help in training children to do genealogy at an early age. I'd also like to add additional resource on how to start your family tree on this website: http://www.family-tree-help.com/questions-to-ask-family/

This is so awesome. I can't wait to see what else you come up with.