When my mother passed away last year, my brother and I cleared out her apartment. We were rushed and I brought home items that we hadn't taken the time to open that day. When I opened a small box a few months later, I found a dozen or so loose gemstones. Nothing valuable, some were coloured glass, and four were topaz.

I wasn't sure what on earth to do with them. They weren't valuable except obviously they meant something to my mom. While they could be kept, the odds that anyone would treasure them and pass them on through the generations as a memento of my mother were slim.

Then my niece said she had an idea. She took the gems to a friend of hers and had custom pieces of jewellery made from them.

My niece just sent me some photos of what she had made and I'm so impressed I wanted to share the photos with others. 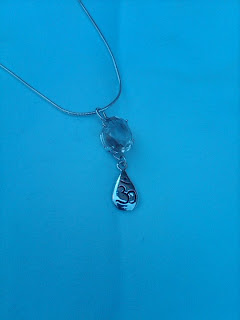 It was very creative of my niece to think of this, and a wonderful way to pass those gemstones on to others who will hopefully think of my mother when they wear them. 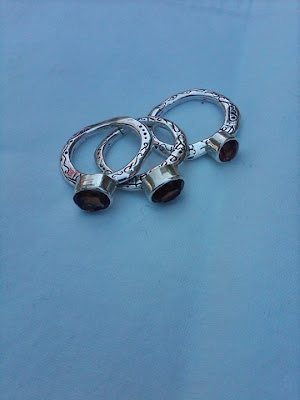 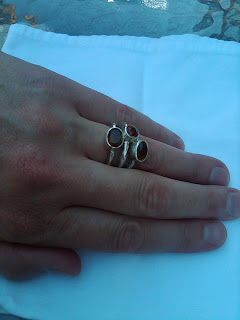 So loose gemstones that would have been lost over time have now been transformed into beautiful jewellery that can be worn and passed on as a family memory of my mother.

Thank you Risa for your great idea! Enjoy your gorgeous jewellery made from stones that belonged to Grandma Joan.
at August 18, 2010

Great post! It really does take very little to start a family tradition and it is never too late to begin one.

Thanks Aunt Lorine! I just love the jewelry and wear it all the time, especially the rings!

I did promise to send details on the artist as well. You can find her work at www.sonjapicard.com.