A few days ago I wrote about my great grandfather's brother Harmon P. Peer in When Family Lore Turns Out to be Even More Exciting. Harmon jumped from the Niagara Falls Suspension Bridge in 1879 and I thought, died in the attempt. But the newspaper extract I had was incorrect! He didn't die that day, in fact quite the opposite. With the help of several readers, much more was found about Harmon.

When Harmon made his leap in May 1879 he was not suicidal. He was not being impulsive. He was a performer, a daredevil and with his cousin Steve Peer, he put on a show for the crowd of 1,000 spectators.

According to various newspapers in USA, Canada and even Australia, Harmon set a record for base jumping that day, beating Sam Patch's former record by over 100 feet! In fact an Encyclopedia about Stunts and Base Jumping states that Harmon was the first recorded base jumper. 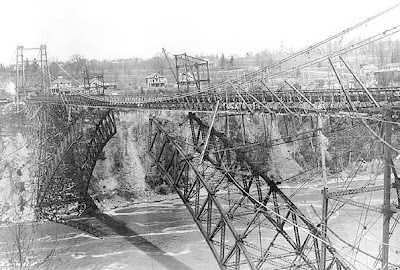 While his cousin Steve, who was a well-known tightrope walker and former assistant to Bellini, performed a few gymnastics for the crowd, Harmon circulated and collected money for his performance. Apparently he only collected $11.00 that day but the crowd was thrilled by his act.

Wearing tights, stockings and a leather harness, he was fastened by a thin cable to brass rings at his shoulders, which then looped around a cylinder which allowed him to free fall but remain upright. He fastened elastic around his legs and feet to hold them together and wore a cone-shaped life ring which also helped keep him upright in the water. In his mouth and nose he stuffed sponges, and smaller ones were inserted in his ears.

After jumping into the Niagara River, a distance of 192 feet below, he popped to the surface and was picked up by waiting boats. He then announced that he would repeat his jump on July 4th.

July 4th came and over 5,000 people gathered to watch the show. His cousin Steve Peer was on hand to entertain the crowd too, and according to newspapers, Steve ran up and down the beams of the Suspension Bridge, a very difficult task due to their angle. Harmon arrived, very drunk according to newspaper accounts, and collected a rather large sum of money!

But then he refused to jump and had to be rescued when the spectators became an angry mob. Newspaper accounts provide quite a bit of detail on the botched leap.

We next hear of Harmon on August 6, 1879 when he made a leap into Lake Ontario from the steamer Empress of India. This was only a small leap of less than 100 feet from  a derrick on the deck of the steamer as it made it way out from Toronto. Apparently Harmon was rather intoxicated at the time, and on the return voyage made a nuisance of himself. According to one paper, he "stamped himself a first class rowdy" by becoming drunk and using "insulting and blaphemous language to passengers, both male and female"

Harmon disappears from Canadian records after that date, but thanks to my readers, he was found in Cleveland Ohio with a wife (not the wife he left in Ontario!) and children. He is perhaps the Harmon P. Peer who died alone in Philadelphia Pennsylvania in 1903. Unfortunately his parents' names are not given on the death certificate but other facts fit.

He named one of his sons Harmon Philip Peer (his own name) and this seems to be the only one of his three known children who lived to adulthood. I've never been able to find the name of his child born in Ontario to his Canadian wife Theresa Ann Perrin. According to Ohio birth records and census records he had a daughter born in 1894 to wife Martha, a son (Harmon Philip) born 1892 to wife Martha and a son Frederick born 1885 (found on census only so mother's name not confirmed)

Why do I call him the Forgotten Man? Because he is not on the list of Niagara Daredevils although Sam Patch, whose record he surpasssed, is. He is not in Pierre Berton's book on Daredevils of the Falls. Why is Harmon not included when he is found in so many newspaper writeups with proof of his jump and the record for distance? He may not have been the kind of fellow we want for a friend (or relative!) but he did set a base jumping record and he deserves his place in history.
at August 17, 2010

Great story! I had been waiting for the follow up. I hope I can figure out what the deal is with my grandpa's brother! ; )