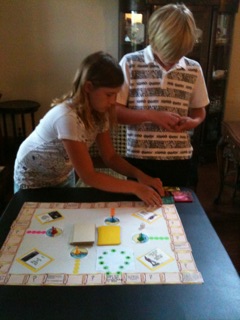 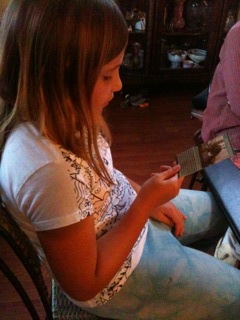 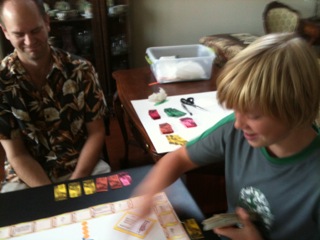 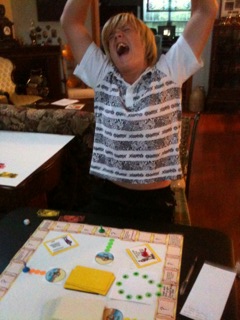 All in all it's been really fun playing this game with the kids and I'm excited to make the final version and get it laminated, then try it out on my other seven grandchldren.
at August 27, 2010

What a great way to get the kids involved!

How about Traveling in Time, or Time Travel. I'm so glad everyone had fun.

What great fun! I thoroughly enjoy your kids genealogy activities. I think you can go commercial with your board game idea!

Hi,
What a great idea. I saw a link to your post from Randy Seavers weekly best of the Genea-blogs. I have a few questions: Would you laminate it for durablility? Another idea would be to use clear contac paper and stick it to both sides. I have a ten year old and I know how hard they can be on board games. I love your idea. I need to read your four other posts.....

Greetings Lorine,
I agree with Joan; you need to go commercial with this. I would love a game such as this to play with my kids.
The photos of your grandkids were entertaining as well.
~Kathryn

I absolutely love this idea. I agree with the kids - the death cards are the most interesting (even though I'm an adult).
I might just have to steal your idea :)

I was sitting thinking here about developing a genealogy game and thought I would research to see if anyone had already done it. Alas you have! Great idea!