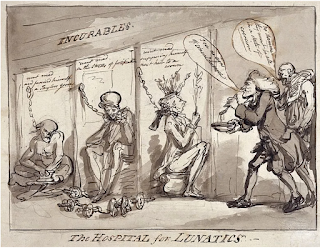 Mental Institutions were once called Insane Asylums and those committed to them were deemed lunatics, idiots, imbeciles, crazy, and other terms we now consider derogatory. Many times people committed did not suffer from mental illness. Women were frequently admitted with what we now know was post-partum depression, or menopausal hormone changes.

For the genealogist, these institutional records are full of information that is horrifying yet important in our genealogy research. Below are some links, both pay-to-view and free, leading you to various online databases of Insane Asylum records.

Annual return of lunatics in the Stockton Union Yorkshire England 1870

Clifton Asylum, Yorkshire England Names of private lunatics in the Asylum at Clifton on 1 January 1869

Annual Report of the Medical Superintendent of the Provincial Hospital for the Insane, Halifax, Nova Scotia