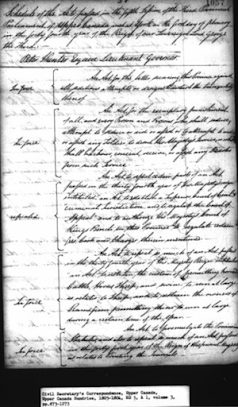 The Upper Canada Sundries are an invaluable genealogical resource but many researchers have never used them.
The Upper Canada Sundries, aka Civil Secretary's Correspondence  are found at LAC (Library and Archives Canada) and at the Ontario Archives. They consist of 32 volumes on 14 reels of microfilm and are an assorted collection of, as the name implies, correspondence. They have been digitized and are available online at the link above.

The main responsibility of the Civil or private Secretary to the Lieutenant Governor was management of correspondence. The Secretary ensured that it was acknowledged, referred onward or filed. Closely related were the duties of receiving and acknowledging Addresses, petitions, memorials and applications for office; transmitting Messages and public documents to the Legislature; and referring petitions to the appropriate public offices for opinion or advice prior to submission to the Executive Council.

Although the province of Upper Canada did not come into existence until 1791, supporting documents of earlier date have been incorporated into some series of its records.

The Sundries are filed chronologically. There is no name index but the wealth of genealogical information makes them worthwhile to browse through. They contain an assortment of such genealogical items as undated petitions, marriage certificates, land records, letters, petitions for land, testimonies during wartime, military records, petitions for mercy for those charged with treason, etc.

Following is one example which I found during a lengthy search of the Upper Canada Sundries. It concerns the daughter of my Loyalist Ancestor Isaac Van Valkenburg aka Vollick. It reads as follows with my notes inside square brackets [ ]: 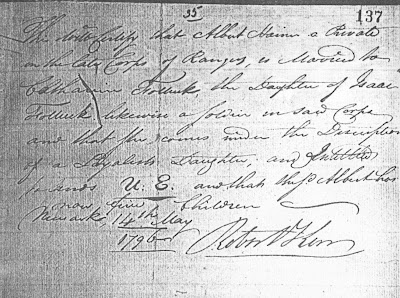 This will testify that Albert Hainer a Private in the late Corps of Rangers [referring to Butler's Rangers, whose disbanded soldiers settled the Niagara area of present day Ontario], is married to Catharine Folluck [sic. More commonly written as Vollick or Follick], the daughter of Isaac Follluck, likewise a soldier in said Corps and that she comes under the description of a Loyalists Daughter, and is entitled [can't read next word] U.E. [Unity of Empire, a title applied to Loyalists once they were accepted by the Council and officially declared a Loyalist] and that said Albert Hainer now has five children.

It has some pretty amazing genealogy information! I have more proof that my Loyalist ancestor Isaac was in Butler's Rangers, that he had a daughter Catherine who married Albert Hainer before May 1796 and that Albert and Catherine had 5 children by that date. This document also tells me that Albert was also a soldier in Butler's Rangers and that Catherine's father has been approved as a Loyalist (as per her being allowed the title of U.E. after her name)

This leads me to more research - I would now hunt for petitions for both Isaac Vollick, his daughter Catherine and her husband Albert Hainer. They should all have applied for land as Loyalists and their petitions should be found in the Upper Canada Land Petitions.

And thus a new avenue of research opens for me. (As an aside, I have already done this research and have found many petitions for all members of the large family Isaac Vollick brought with him from New York.) Don't miss my book on the Loyalist Isaac Vollick (aka Van Valkenburg)! 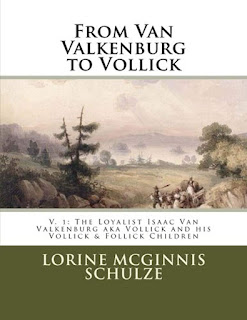 From Van Valkenburg to Vollick: The Loyalist Isaac Van Valkenburg aka Vollick and his Vollick & Follick Children available at http://amzn.to/2icnMIw
at April 13, 2021