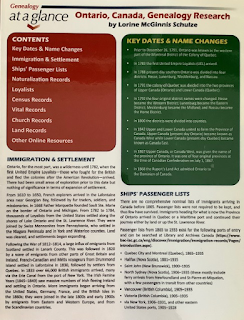 If you are hunting for ancestors in Ontario you won't want to miss my new 4-page guide!

I wrote about how to find genealogy records in Ontario in "Genealogy at a Glance: Ontario Canada Genealogy Research" published by Genealogical.com

Ontario, Canada’s most populous province, was a wilderness until 1782, when thousands of Loyalists from the United States—fleeing the colonies after the American Revolution—settled along the shores of Lake Ontario and the St. Lawrence River. They were soon joined by Swiss Mennonites from Pennsylvania, and in the 19th century by emigrants from Great Britain, Ireland, Germany, France, and other European countries.

Following the format of the other publications in their “At a Glance” series, this guide—in only four, laminated pages—gives you all the information you will need to begin tracing these Ontario, Canada, ancestors. Topics covered include immigration and settlement history; ships’ passenger lists; naturalization records; Loyalists; and census, vital, church, and land records. Throughout the guide are informative tips and numerous online and print resources that will help further your research.

In short, Genealogy at a Glance: Ontario, Canada, Genealogy Research highlights all the basic elements of Ontario family history research in an easy-to-use format, allowing you to grasp the fundamentals of Ontario genealogy “at a glance.”

NOTICE: The company does not ship to Canada. Canadians wishing to purchase the Guide may order one from me by writing to olivetreegenealogy@gmail.com

I'd love to order this, but they won't ship to Canada.

Jackie, I can sell you a copy directly. If you are interested please send me your postal code so I can calculate shipping and give you a total cost.