When Family Lore Turns Out to Be Even More Exciting!

As a teenager I heard stories about my great-grandfather's brother who walked Niagara Falls on a tightrope in 1880, and sadly fell to his death. My uncle Roy claimed he had a newspaper clipping about this but couldn't find it.

I was intrigued but a bit skeptical. Niagara Falls? Tightrope? Nah.... But my uncle insisted and told me that the name of my great-grandpa's brother was Harmon Peer.

Many years later I discovered that Stephen Peer, a cousin to my great grandfather, had indeed walked Niagara Falls on a tightrope and fell to his death. The year was 1887. He has the dubious distinction of being the only person to ever die walking the Falls on a tightrope. Hmmm... most of the "facts" fit. But his name and relationship to my great grandfather weren't quite right. The year was wrong, but family lore is often a bit vague and not quite right. Was this the man?

Then I found a newspaper extract about a man named Harmon P. Peer who tied a thin wire cable to his ankles and jumped from the Niagara Suspension bridge in 1879. According to the extract, he died in the attempt. A check of my genealogy files and bingo! There was my great-grandfather Stephen Edward Peer and his brother Philip Harmon Peer! The ages were correct. The year of death was within one year. I had my man.

I was satisifed. Never gave it much more thought, it was just an intriguing tale to tell my grandchildren. I did wonder though why he tied that cable to his ankles before he jumped. Was it suicide? It seemd an odd way to do it. A stunt? The Peer family was known for its daredevil ways, perhaps he was the first bungie jumper!

And so the story of Harmon Peer sat in my files for many years. Until yesterday. I realized I didn't have his death certificate so went on a hunt. Nothing. His death was given as May 1879 in the newspaper extract. Odd that it isn't registered in the Ontario Deaths online at Ancestry.com

But then I scrutinized the extract more carefully. The date of the newspaper article was given as February. How could anything written in February be reporting a death near the end of May? (Note to self: READ documents more carefully next time! THINK about what I'm reading)

So I went on an Internet hunt. Lo and behold I found a dozen newspaper reports in the USA and in Australia (yes, Australia) about Great great uncle Harmon Peer from Teetersville Ontario. 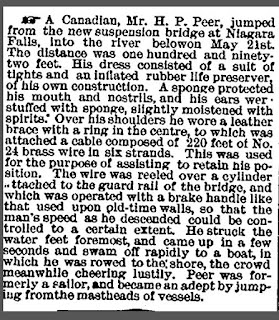 It seems Harmon was a jumper. He was a showman, his jumps were planned and executed with precision, and he attracted huge crowds of specatators! It was fascinating to read about his successful jumps from the Niagara Suspension Bridge and how he got his start - jumping from the Watson & Co. Elevators in Milwaukee, a distance of 62 feet. I haven't yet found a newspaper article that describes that jump in detail and I can only estimate the year - around 1870-1875 most likely.

By the time he made his record-setting jump from the Niagara Suspension Bridge he was about 36 years old. It was May 21, 1879. He dressed in tights with a wide rubber life-preserver fastened to him. It was funnel shaped and went from his hips to his armpits, allowing freedom of movement in the water.

A sponge was tied over his mouth and nose, and two smaller sponges stuffed into his ears. I'm not making this up, it is all in the newspaper articles. A leather shoulder suspender with two brass rings at his shoulders came next. To the rings was attached a thin brass wire to assist in keeping him upright.

A wide elastic band just above his knees and a second around his feet to keep them from spreading completed his outfit. For the May 21st jump he had a wooden platform suspended out from the bridge but for earlier jumps he simply fell over the bridge railing. The May 21st jump gave him the world record of 192 feet.

He completed the jump successfully and I have not yet found an article regarding his death. So now I have to ask myself - did he die? Or was the extract completely wrong?

According to all the 1879 newspapers I found (The Mercury in Hobart Tasmania, The Hawaiian Gazette, Janesville Wisconsin Gazette, Jackson Sentinal in Iowa and others) Harmon intended on making another leap off the Niagara Bridge on July 4th 1879.

I am now seeking some evidence of this July 4th jump or his death! Without online access to Ontario newspapers my hopes lie in the American or Australian ones but so far no luck. I am also hoping to find a newspaper story about the Watson Elevator jump in Milwaukee.

Another interesting tidbit (if true!) in some of the newspapers was that Harmon had fallen from the mast of a sailing boat sometime around 1870 in the Caribbean, then again in Milwaukee from another vessel. I wasn't aware he was a sailor so am not sure if this was true or he was inventing tales to help promote his jumping.

But what a story! What a great find. To think that my Uncle Roy's story was pretty close to the mark. It just goes to show that although family lore is often myth, it just as often has a kernel of truth. In this case it was merely taking two true events and confusing them as one.

This year I'll have even better stories to entertain my grandchildren. Harmon Peer the jumper and Stephen Peer the tightrope walker are both in their family and chidren love stories of adventure and stunts and daredevil relatives.  I just hope it doesn't encourage the same actions from them!

Oh, and if anyone has access to newspapers that might carry some stories about Harmon Peer, I'd be overjoyed to know about them!
at August 12, 2010

I am often surprised at the amount of family lore that is true, even if not completely factual correct. This is a prime example, and what a great story indeed to tell your grandchildren!

Greetings Lorine,
I am in Niagara Falls right now reading your post about your daredevil ancestors!! If I remember correctly, the IMAX theatre is featuring a movie about the Falls daredevils. I didn't see it. It might be worthwhile contacting them to check it out to see if Harmon is in it. Wonder if the Niagara Falls archives has info? Just a couple of thoughts...
~Kathryn

Did you see this one... looks like he never made the jump on July 4th:

Interesting that two family members would perform stunts at The Falls. Maybe setting the record was enough and he retired to a quiet life. At Family Search in the Ohio records are two births, a boy born 23 Apr 1892 and a girl born 30 Aug 1894 in Cleveland to Harmon P Peer, born abt 1843-44 Canada and his wife, Martha. The son was named Harmon P Peer, didn't discover the name of the daughter and per Martha's death record and the limited amount of census info available at Family Search it appears they either divorced or he died soon after. (Footnote.com is down right now so I can't check there.)Could be I have the wrong guy and I'm sending you on a wild goose chase.

Don't know why I didn't think of this earlier but the Niagara Falls Gazette is available at Old Fulton Post Cards. You find lots of pages quickly by searching for "H P Peer." There were also a couple of articles from later in the summer in one of the Oswego papers - search "Harmon Peer" that said he jumped from a ship near Toronto. The site is very slow to load pages evening and weekends!

Steve indeed lost his life on the wire.....he was doing a quick demostration for a couple of friends after leaving the Elgin hotel and slipped and fell into the gorge. Intersting how he learned his trade, lived here in Stamford township and learned to tightrope using fence posts and vines on the family farm. Worked for the great Belini who was very famous here in Niagara on the ropes....Asked belini if he could go out on the wire and belini told him no... In between performances he did get out there..and Belini was so mad because Peer was performing stunts on the wire that put Belini to shame...Belini decided to cut the rope he was on and the crowd watching attacked him.....causing Belini to leave town and never return. the july 4th perfomance o the suspension bridge didnt go to well for his cousin H.P. apparently he got too drunk to safely preform and abandoned it all at the last minute to the dismay of the waiting crowd........lol