A Genealogy Board Game For Children: Part 3 The Cards

I've talked about creating a Genealogy Board Game for my grandchldren this summer. In A Genealogy Board Game For Children Part 1 I explained how I created my Game Board with squares. You can also read Part 2 which continued discussing the creation of the actual game board. 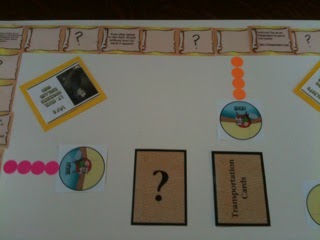 Today I want to talk about how I created cards which players draw from 2 piles on the game board. The cards are drawn when the players land on squares marked with a ? or Take a Transportation Card
The ? pile consists of laminated 3x4 1/2 inch cards. These cards are either an UH-OH card or a CONGRATULATIONS card.
Each card describes an event that actually happened to an ancestor. Example: the marriage of Alex McGinnis and Harriet King.
The ancestor's relationship to my grandchildren is noted, as in "Your 5th great grandfather...."

Each card requires the player to do something - the UH-OH cards require that a player give up money or lose a turn or both. The CONGRATULATIONS cards allow a player to receive money or move ahead a certain number of squares.

The top half of each card has a photo or drawing of the event or the ancestor. For example, the card I created about the will of Jacob Peer in 1815 has an image of the will. The card for the marriage of Alex and Harriet has the marriage certificate. The card for an event about my grandfather has his photo.

The bottom half has the event and the consequence. I describe what happened (the event), give the year and ancestor name, then a logical consequence.

For example a wedding could be an UH-OH Card. The player might have to pay to buy a wedding gift, or a new suit. They might have to miss a turn to attend the wedding. It could also be a CONGRATULATIONS card - perhaps the happy couple is celebrating and giving family members money!

Let me give you some examples of the cards I created: 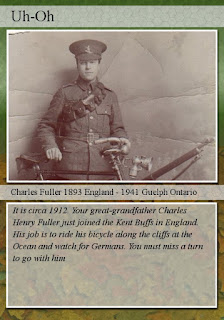 It is circa 1912. Your great grandfather Charles Henry Fuller has just joined the Kent Buffs in England. His job is to ride his bicycle along the cliffs at the Ocean and watch for Germans. Your must miss a turn to go with him. 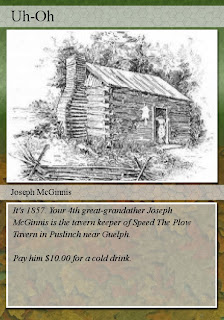 It's 1857. Your 4th great grandfather Joseph McGinnis is the tavern keeper of Speed The Plow near Guelph. Pay him $10.00 for a cold drink then continue on your journey 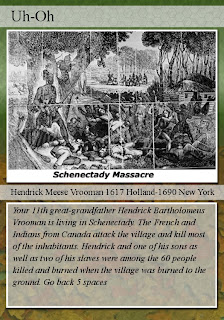 Your 11th great-grandfather Hendrick Vrooman is living in Schenectady. When the French and Indians from Canada attack the village, he and his sons are killed. Go back 5 spaces 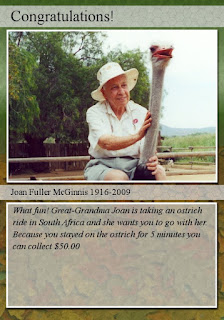 What Fun! Great-grandma Joan is taking an ostrich ride in South Africa. She wants you to try it too. Because you stayed on the ostrich for 5 minutes you collect $50.00 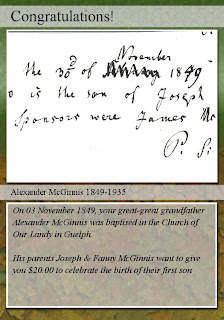 It's November 3, 1849. Your great great grandpa Alex McGinnis is being baptised in Church of Our Lady in Guelph. His parents Joseph & Fanny want to give you $20.00 to celebrate the birth of their first son 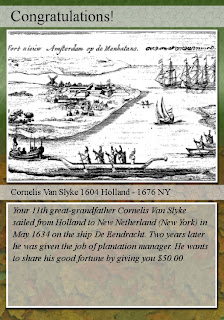 Your 11th great grandfather Cornelis Van Slyke sailed from Holland to New Netherland (New York) in May 1634 on board the ship De Eendracht. Two years later he was given the job of plantation manager. He wants to share his good fortune by giving you $50.00


These are examples of the 50 ? Cards I created. They go face down on the ? square in the middle of the game board. I'll describe the Transportation Cards and how the game board has developed to final stages in my next two blog posts so be sure to check for it in the next few days.
at August 20, 2010

Lady, how do you do everything that you do?

I have been amazed and impressed by your dedication, thoroughness, and knowledge of all things genealogy since we first met in the 1990s. Now I see the same applied in this game you are making with great creativity -- and you still have time for antiquing, cooking, and immediate family. I know! You must never sleep!

This game is amazing and the quality of the game board and cards is superb!