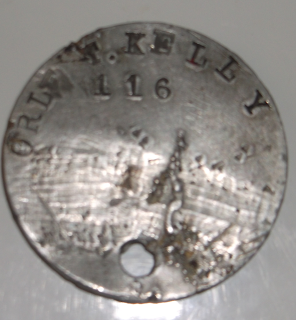 Joey wrote to Olive Tree Genealogy asking for help with a WW1 dog tag he found in Wheaton Missouri.

On one  side the inscription reads ORL then what could be an F or an E then a T. KELLY under that there is a 116. 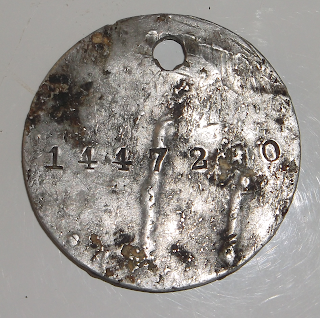 So we know that the soldier's name was T. Kelly, his rank was ORL (I have not yet found what that represents) and his unit was the 116. The number on the reverse is his longer personal military number.

My husband and I think that could be a stamp or insignia between ORL and T. Kelly  and not a letter. We also think it is an American soldier's dog tag.

But just to cover all bases, I had a look in the Canadian Expeditionary Force (CEF) online database because it is searchable by the soldier's number but there is no T. Kelly with a number starting with 14472. I then searched U.K. WW1 records on Ancestry.com

because they are also searchable by soldier number but that was a miss.

are not searchable by the soldier's number. I did find a Jonathan Ernest Kelly living in Wheaton Missouri at the time of his enlistment but could not spot a T. Kelly.

So we need my wonderful readers to pitch in and help find the soldier who lost this dog tag. You've solved 13 cases of the 17 posted previous to T. Kelly so I have no doubts you can work your genealogy sleuthing magic again!

Please either post your findings here as a comment or send them to me privately at olivetreegenealogy AT gmail DOT com  Remember to not put any information about living individuals in your comments, any contact addresses or phone numbers for descendants of T. Kelly should be sent in private email.

Are you sure ORL is a rank? Because there is an Orley Kelly who registered for the WWI Draft Registration in Hannibal, MO (home of Mark Twain), which is 300 miles north of Wheaton.

There are two Orley Kellys who died in Missouri. The first one was the man above who registered for the WWI Draft, and his full name was Orley I. Kelly. He died in January 1942. No mention of military service is on his death certificate. The second man, Orley Kelly, *WAS* a WWI veteran, according to his death certificate of 9 Dec 1947. He would have been too young to appear in the WWI Draft Registration of 1917-8, and in fact, would have served under age. He has a Find A Grave Memorial, too, but no grave photo.

Click <a href="http://www.sos.mo.gov/archives/resources/deathcertificates/Results.asp?type=advance&tLName=k&radFNSearch=Exact&tFName=&tYear=&sCounty=all&radSearch=Starts&sMonth=all&offset=22000#null>here</a> to go to the Missouri Death Certificates.

Try this link instead to get to the Missouri Death Certificates: http://www.sos.mo.gov/archives/resources/deathcertificates/

Thanks for the possible leads Miriam! Usually there is a rank given BUT I'm willing to entertain the thought that ORL might be an abbreviation of a first name. It would be a bit odd to not just have initials O.T. Kelly but... it's a great possibility and worthy of followup!

During WWI, did they stamp U.S.A. on the dogtag?

Usually/often/sometimes yes - USA was stamped on the dog tag. But not always

There is also the possiblity that this tag was issued after WW1 to someone in the military.

I did a little Googling on "ORL" out of curiosity. The only acronym that I could find that made any sense militarily was "Ordnance Release Line", but I couldn't find a good definition of what that actually is. Maybe someone else can come up with something helpful.

Greetings from Oregon! I just happened to come across your blog last night and have just subscribed. So much wonderful information, thank you!

Anyway, I'm not sure if this "dog tag" mystery has been solved or not, but just in case it hasn't, I wanted to posit a guess. You posted this in 2013. Well, it turns out that a find-a-grave entry was added in 2014 that may crack the case.

Orlo Thomas Kelley (1895-1972), lived in Springfield, MO (cf. 1940 census under "Irlo G Kelley") within 60 miles of Wheaton, MO. WWI Vet. Was living in Humboldt in the southeast corner of Kansas in 1915 and 1920. His gravestone states that he served with the 137th Infantry, which was a part of the 35th Divison according to this website: http://www.kansasguardmuseum.org/dispunit.php?id=7. The 35th was comprised of Kansas and Missouri National Guardsmen. The 116 on the tag may have been his roster number and not his unit. A draft registration card is not popping up in ancestry, but if he already was in the National Guard then he wouldn't have filled one out, right? I have 2 guesses as to why this isn't a standard issue tag (no rank, etc.) - both of which are based on imagination rather than actual knowledge. 1) His division was called up within only a few months of US engagement in the war, so maybe the "standard" was still being developed. Or, 2) This was his National Guard tag and when the unit was commissioned to go to Europe he was issued a new one in the standard format (e.g. rank, USA). What do you think? Could this be the person? If so, good news, there are relatives active on ancestry.com.

Following up on Jodie's comment, Orlo T. Kelley is listed on the roster of Machine Gun Company of the First Kansas Infantry Brigade which was part of the 35th Division. That matches up with the MG as his company on his gravestone. See the books "From Vauquoir Hill to Exermont: A History of the Thirty-Fifth Division of the United States Army" and "Reminiscences of the 137th U. S. Infantry" both available on Archive.org. It appears that Kelley's machine gun company was from Kansas so researching the dog tag may have to be done through the Kansas National Guard which has records available through the website of the Kansas Historical Society. Old Missouri National Guard records are available at the website "Missouri Digital Heritage".

I think Jodie is correct when she says "This was his National Guard tag and when the unit was commissioned to go to Europe he was issued a new one in the standard format (e.g. rank, USA)." The First Kansas Infantry was consolidated into the 35th Division in October, 1917.

Thank you to everyone who did research and left comments above to help out.