Who Do You Think You Are? Season 4 Episode 1 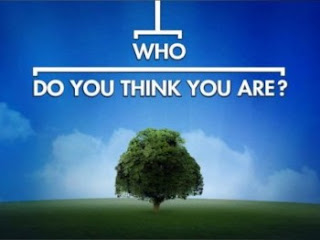 Last night I watched Who Do You Think You Are? as Kelly Clarkson followed the trail of her ancestor Isaiah Rose. I'd already seen it when I downloaded it from iTunes for free but wanted to watch it again.

If you missed Episode 1 you can tune in next Tuesday on TCL as they, in partnership with Ancestry.com

, present Episode 2 with Christina Applegate. I'm really looking forward to that episode as I know Christina discovers some disconcerting secrets in her family tree

I thoroughly enjoyed Episode 1 and liked Kelly's enthusiasm. She seemed completely natural and for me there was no feeling of "this is all rehearsed" (even though I'm quite sure there is a script of sorts). If you miss an episode you may be able to watch it the next day on TLC depending on what country you live in. For example Episode 1 is available  for viewing now but not for me in Canada. TLC tells me I must visit discovery.ca to watch videos but of course Who Do You Think You Are? is not one of those offered to Canadians.

What surprised me this morning was to see some criticism on Faceboook. One genealogist mentioned that he/she didn't believe that Kelly's mother had no clue that her 2nd great grandfather was a Senator. I was flabbergasted! Things happen in families - sons become estranged from fathers, daughters run off and elope and are disowned (as happened with my own great-grandmother).... When that happens, there is often no mention ever again of the grandparent or parent. So why would this be difficult to believe? We have no clue what events transpired in the Rose family.

In my own family, my father knew nothing of his paternal grandfather and never met him. In fact he didn't know that the man was alive until my dad was in his late 20s! My grandfather and great-grandfather were estranged and didn't speak or see each other for the rest of their lives.  So great-grandpa was never spoken of.

As for my father's maternal grandparents, he knew very little  because his grandmother had run off with his grandfather against her parents' wishes. They disowned her and never spoke to her again. So she never spoke of them.

And we must also remember that "back then" children were seen and not heard, and adults tended to whisper in corners about things that did not, in their minds, concern children. So often a child grew up knowing very little about family and ancestors.

Email ThisBlogThis!Share to TwitterShare to FacebookShare to Pinterest
Labels: Ancestry.com, The Learning Channel, TLC, WDYTYA, Who Do You Think You Are?

I enjoyed it as well and if I have any complaints at all it's that all the focus was one one single ancestor who did memorable things. I know it makes for better tv when there are lots of records and big discoveries but it reinforces the idea that we have to be related to someone important to feel important ourselves. I feel it may discourage people who don't find such memorable ancestors.

Another thing to consider is that some people are simply not interested, as difficult as it is for some of us to believe. Someone I know said "I knew my grandmother and I loved her, and I don't see a reason to learn more." Sad (IMHO), but true.

Try looking for it on iTunes. I watched it there nearly a week ago. It took a long time to download, but once loaded, was a breeze to watch.

I watched it on iTunes nearly a week ago. It took a long time to download, but once loaded, it was a breeze to watch.

I totally agree! My parents, specifically my dad, were not aware of birthplace/birthdates of their grandparents. Things like that were really of no concern when they were growing up. Families were too busy trying to feed the children than worry about ancestry. Not everyone's past is as clear as others'!

My paternal grandfather left the family in 1952 to pursue an alternative lifestyle. My uncle finally tracked him down in 2003 but he had passed away in 1999. His partner sent us lots of newspaper clippings and information about his life. It turned out that he had many of the same interests that I do. As I research his family line it's almost therapeutic to find out about this man I never met.

Being a State Senator is also quite different than being a US Senator. Still important, but once the family leaves the state, more likely to be forgotten.

My own dad knew nothing of his grandfather, only that he "was in jail for moon shining" after searching I found out his name and that in deed h was in prison...for murder. He was so surprised when I showed him the newspaper articles. I don't know if my own grandfather knew this as he was not yet born and the trial was tight after his birth. My aunt said her grandmother never talked about him.