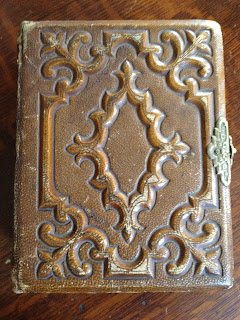 Another Civil War Photo Album has been rescued. That's right, I couldn't pass this one by. Almost every page in the album has writing which identifies who is in each photo.

The album is in good shape but the pages are stained. The photographs are also in decent shape which is surprising considering the rough life I think this photo album had.

I will be documenting and archiving the photographs over the next few months but here are a few of the camera photos I took as my first step. 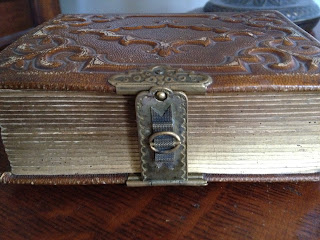 For those who haven't followed me before when I rescue and preserve these old albums, my first step is always to photograph each album page with the photos intact.

Only after that is completed do I attempt to carefully remove the photographs to see what is on the back and to scan them properly. 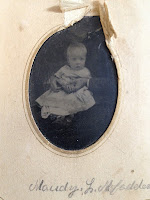 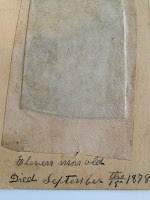 This was one of the few photos (a tintype) that did not have writing on the album page itself. Instead it had a penciled name "Mandy (or Maudy) L. McFadden" on the front. On the back (verso) it had a sad note "Eleven mos old. Died September 15th 1878" 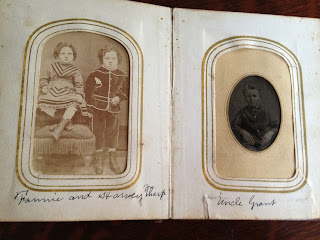 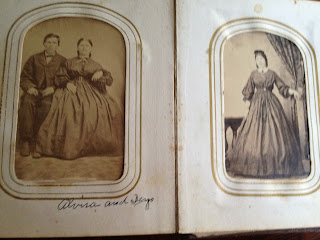 This is an example of the inside photo album pages and the gorgeous Civil War era photos inside! The surnames I have spotted already are Chidester, McKay, Deyo, Tharp, Strong, McFadden, Duncan, Bush, Perry, Pittenger. The locations of photographers are Iowa, Indiana and Nebraska.

I will continue to update with scans and details of individuals as I remove the photos from the album and as I spend some time researching the names. Those interested will be able to follow along by clicking on the tag "Chidester Photo Album Archive" in the right hand nav bar on this blog.

I'm interested that your first step is to photograph each page with the photos intact. My cousin-in-law just sent me my uncle's photo album to preserve, and I was thinking of taking that step first! I'll try using my iPhone camera at first, in a nice bright light--the pages are large, and I really don't want to stitch 6 pieces together with Flip-Pal for each album page -- even tho Flip-Pal is great.

I'm eager to see if there is any writing on the back of the photos. Several photos are of my mother as a child.

Thank you for your description -- it's very helpful.

Mariann - the iPhone pics don't have to be top quality. It is only to record/document the original placement of photos in the album.

after carefully removing the photos, I then use Flip Pal to scan each one, front and back.

I also number the photos (in order) on the back in pencil, with an abbreviation for whatever I label the album, such as CHI for Chidester, followed by the number.

Have fun with your new album!

Well I tried to post this previously and I guess it didn't take. I just wanted to say how excited I was reading this blog post. It was the first of your blog posts that I had read and it was exciting to see a name I'm currently researching show up in the post. I'm currently researching the McKay name in my family line so I would love to hear more about this find! Who knows, maybe they're cousins or something. :)