Did Your Ancestor Disappear from the Records? 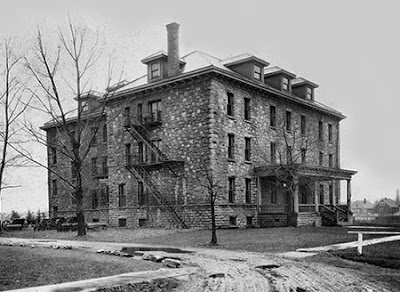 Many of us have had that problem. We're searching for an ancestor and finding him or her in census records, vital records and more.

Just when we think we're on a roll, that ancestor disappears! That's when you need to expand your search to other records such as orphanages, workhouses or almshouse (poorhouse) records.

New York Almshouse Records 1819-1840 - These contain the names of the ship each person sailed on, plus dates of arrival.

New York Almshouse Records 1855-1858 - These contain the name of the ship and the arrival date and port for each person.

Passenger List of Waegh (The Weigh-House), 1655 - with names and ages of the Almshouse children, who sailed to New Netherland (New York) from Amsterdam Holland

Where would be the best place to learn about finding a parent that was not on a birth certificate or even talked about?

My great grandfather was listed as "deceased" on my grandfather's birth certificate (1892) and I can find no information about him, other than knowing his name. The GG was born in NY and I "believe" his parents were born in Ireland. Any help on what to do next would be so appreciated! Tnx. Kim

It happens. How often have we heard: "Yup. Uncle Al, went out for a pack of smokes and we never heard of him again!"

If the person who disappeared was a male, look into military records. War has a way of sweeping up vast numbers of able-bodied men and the age range depends on the length of the conflict and in the case of draft registration cards or militia eligibility log books you can sometimes find your AWOL ancestor.

My g-grandmother's kid brother abandoned his young wife and infant son in a gold mining town in CA in 1915, never to be heard from again by any relative. But I found him in the World War I draft registration cards for Sept 1918, where he was working for a different gold mine elsewhere in the state and posing as a single man. He even put down his father's correct name and address in OR as his contact person.

People who disappear traditionally follow the same line of work, so it wasn't a huge surprise to see this guy at yet another mine. While I still don't know what became of him after that, knowing he stayed in CA for at least a few more years and that mining continued to be a big industry makes me suspect I'll eventually find some record of his death in a mining town or nearby.

Thank you. I have some NY ancestors that I can't find for love nor money, and now that I know these sort of records exist, it seems not unlikely that I may find them in the almshouse records (already discovered one of that line spent 20 years in the insane asylum & its her family I've lost). Thanks for sharing! I've included this post in my NoteWorthy Reads post for this week: http://jahcmft.blogspot.com/2015/05/noteworthy-reads-15.html

My great great grandfather Joseph Beer disappeared in 1900 from Wales, there is no sign of him in 1901 or 1911, his wife was still recorded as married. The family story goes that he packed his work tools one day, headed to work (as a mason) and never returned. I am very lucky as I have a picture of him.

Some sources that I've found useful are listed under the heading 'People Who Vanished' on Genealogy and Archives Research Tips - and Archives worldwide tend to hold the same kind of records.