I received this email earlier this month about a very happy ending for the search for family of James J. Bell and of Idaho, and his rescued dog tag. 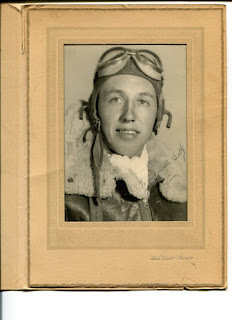 Thank you so much for helping me connect with Mick, the gentleman who found my father's dog tag. He sent the tag, along with a compass, wings and maps of the Seething Airfield to me in care of my son who resides in Manchester, England.

As it turned out, my daughter and I were planning a visit to my son this July, so we were all able to open Mick's package together.

I don’t know who was the most excited to see what Mick had sent me, my children or grandchildren. My 10-year old granddaughter Mariam had studied WWII quite extensively at her school and acted in a play about the Blitz. When she was studying, she had taken a copy picture of my father and his crew to show her classmates. My grandson, Adam was full of questions that you can imagine any 9-year old boy would want to know.

Everyone wanted to hold the dog tag. How amazing to be touching something that my father wore during those dangerous missions. It is hard to believe that out of all the dog tags that must be lost out there Mick would find my dad's.
Along with the dog tag, Mick sent a compass he found at the airfield and a set of pilot wings. When we examined the compass, my granddaughter exclaimed, “It’s stuck. That must be the direction it was pointing when it was lost.” When the children realized that it was lost almost 75 years ago, they were blown away. It is impossible to know who lost the compass and the wings. We can only hope that they survived the war and went on to happy lives. All the items will be kept together and passed on to my son and grandchildren.

My son and I spent quite a long time going over the maps. They must have been top secret when they were created in 1944. It is incredible to think that they were done with such precision in the time before computers. Drawing maps by hand is probably becoming a lost art.

I’ll be visiting my brother soon and will be surprising him with what Mick found. I’m going to start by having him read the post on Olive Tree.

I’m hoping that sometime in the future my husband and I along with all the family can meet Mick and go with him to the Seething field. We all want to see where he found the dog tag and get a feel for the place that was such a significant part of my father’s life.

Please thank everyone involved in this search. My father and I were very close. There are some people we lose in life that we wish we could have even five minutes more with. He is one of those people for me. Finding the dog tag was almost like getting those five minutes back.
All the best,
Catherine (Kit) Bell


P.S. This is a photo of my father that was taken when he completed his flight training. He gave it to his sister Betty.
at September 19, 2018

Oh, this is a wonderful ending for the dog tag case. I'm lucky enough to have my Dad's dog tags but for someone who didn't, touching them for the first time would be a very special experience. Feeling connected to the past!

What an absolutely beautiful story and the memories that it will hold. Thanks for sharing.
Ina Getzoff
Mysticat
Delray Beach, Fla.

An absolutely beautiful story and what great memories it will hold for the family. Thanks for sharing.