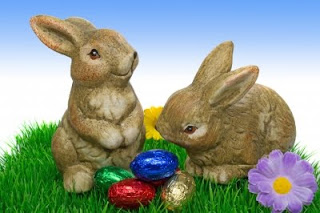 This was announced previously on Olive Tree Genealogy blog but I felt it was worth repeating!

Easter Bunny's Family Tree Found!
Breaking news - yesterday a little girl named Alice was playing in the garden of an old house in England when she fell down a large rabbit hole. Before climbing out she made a unique discovery. In a small wooden box under a pile of rabbit fur hats Alice spotted a yellowed letter. The letter was addressed to "Dear Easter" and signed "Uncle Wiggily", and it provided details of an interesting family tree!

The complete letter has been transcribed below:

I'm glad you asked about your family. Time is getting short for me and I think I'm the only one left who knows the stories of our family.

Your great-grandfather, Bugs, was one of three brothers (Bugs, Peter and Brer). The brothers left their home and sailed for America in the late 1800s. The ship they were on was caught up in a terrible storm and the brothers had to tie themselves to the mast. The ship sank but Bugs, Peter and Brer were lucky enough to find a plank and they climbed up on it and drifted for several days until they were rescued by the SS Lollipop.

When they got to Ellis Island, the customs officials changed the brothers' last names before allowing them to leave the ship, and so the three branches of our family began.

Bugs, Your great-grandpa, kept his Bunny name. Peter's was changed to Cottontail and all his descendants have kept that name. Brer's name was changed to Rabbit and it is from his line that our famous cousins White and Velveteen descend.

Great grandpa Bugs later met and married your great-grandmother Bunny Fufu. I don't know anything about her parents. My cousin Willy Bunny has photos and her family bible but he is stingy with the family information and refuses to share. Apparently Bunny Fufu's family bible was tossed into a fire by Indians when they attacked the settlement where she and her parents lived, but Bunny's father leapt into the flames and saved the bible. I wish Willy would not be so secretive with the information!

It gets a bit confusing, but Velveteen Rabbit, your mother, was your father Energizer's second wife and his third cousin once removed. It wasn't unusual for cousins to marry each other, but it does get confusing as we all seem to have large families.

Velveteen's father (your maternal grandfather) was Peter but I don't know too much about your mom's side of the family. I did hear there was an Angora in there somewhere way back. Some say she was a Princess and Peter rescued her from pirates!

Of course you know your grandparents - Buster and Trix. One day you should ask your grandma Trix why she calls your grandpa Buster by his nickname "Hassenfeffer" whenever she is mad at him, it's a cute story.

I guess I should tell you about the family scandal involving your Great great grandpa Cadbury Bunny. My Aunt Babbity told me she heard the grownups whispering about this when she was little. It seems that Cadbury's father fell in love with a chicken and Cadbury was the result of that love match! This might explain Cadbury's strange behaviour....

Well Easter, I think I've given you enough details to confuse you, but I hope I've gotten you interested in learning more! I know where some of the graves are of your ancestors and will take you there one day if you want to go. It's just a hop, skip and jump away.

Give my best to all the little children when you make your rounds this year,

As ever,
Uncle Wiggily