P is for Palatines 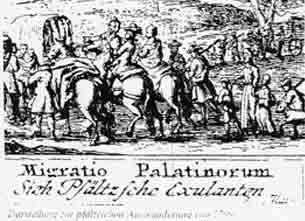 Today's letter is P for Palatines

At the invitation of Queen Anne in the spring of 1709, about 7 000 harassed Palatines sailed down the Rhine to Rotterdam. From there, about 3000 were dispatched to America, either directly or via England, under the auspices of William Penn. The remaining 4 000 were sent via England to Ireland to strengthen the protestant interest.

In 1710, three large groups of Palatines sailed from London. The first went to Ireland, the second to Carolina and the third to New York with the new Governor, Robert Hunter. There were 3 000 Palatines on 10 ships that sailed for New York and approximately 470 died on the voyage or shortly after their arrival.