Someone posted an intriguing photo on Twitter. It was simply a photo of two sisters walking down a sidewalk circa 1940s. It suddenly occured to me that during the time of Sidewalk Photographers roaming the streets of large cities, there must have been hundreds if not thousands of such candid photos taken.

Of course the way it worked was the photographer would snap a picture then try to convince the subjects to purchase a copy.

I have a few of those "Walking photos" and thought it would be fun to post them here. Maybe you have some too? Tell us about them in the comments below.

Left is a photo of my mom and dad in 1946. I love this photo because mother is pregnant with me!

I have another earlier Walking Photo of my grandmother and mother holding my brother's hands. Behind them is my aunt (mother's sister) with her son. It was taken ca 1939 either in Guelph or Toronto Ontario Canada 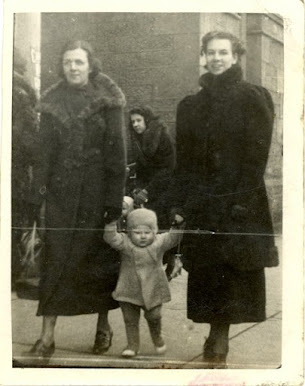 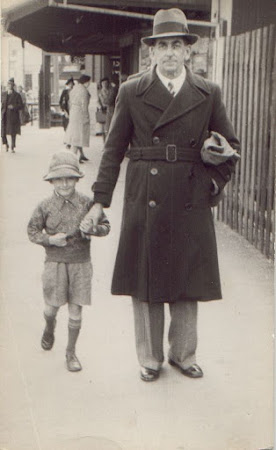 Next is a Walking photo of one of my Australian cousins - my grandmother's brother Albert Simpson with his grandson Johnny Salmon. It was taken in the early 1950s

I have seen a lot of these walking photographs in Saskatchewan . Mostly Regina.

Saskatoon, Saskatchewan is the place where a walking picture of my Dad and Grandfather was taken. These photos are priceless.