Most of us have them. A sentimental keepsake of a beloved family member. The gold pocket watch given to Grandpa on his 21st birthday. The medals given to a father in the Military. A postcard from Aunt Matilda to Uncle Harry during WW1.

Our treasured mementoes can be anything, from jewellery to letters to medals to the bullet supposedly removed from great great grandpa's leg in the Civil War. But where are they? Chances are they are kicking around in the bottom of a drawer somewhere. Or in a trunk in the attic.

Isn't it time to do something with them? To ensure they are not lost to future generations? To display them in a way that you can enjoy them every day? Have you thought about what happens when you, the keeper of that family treasure, are gone? Does anyone else know who the treasure belonged to? Do they know the story behind it? Chances are you are the only person who has that knowledge. So now is the time to preserve and display that heirloom for posterity.

My father died when I was 13. I was given his WW2 Service Medals, his cap badge and a photo of him in his officer's uniform. The photo went into a photo album. The Service Medals and cap badge went into my jewellery box. For years they were buried amongst rings and bracelets. Occassionally I took them out and looked at them.

One day I realized that no one but me knew that the medals and cap badge were his. No one but me knew his rank in the Army, and the only reason I knew was that I had sent for his military records from Library & Archives Canada. So I decided to take his photo, cap badge and medals and create a grouping which I could have framed. Then I could hang the framed memorabilia on my wall and enjoy it every day. Framing them together would keep the mementoes from being lost or separated.

The first thing I did was to take the three items and figure out how I wanted them arranged. Next came the decision regarding the picture frame and the mat. Because this was my father and his military memorabilia, I wanted a frame that was somewhat masculine and dark coloured. It's important to choose your frame and mat to suit the objects you are displaying so take your time when making this decision. 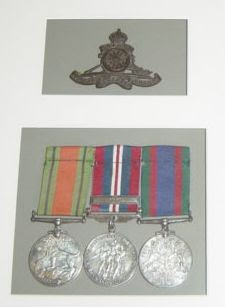 Because I was having medals and a cap badge mounted, I decided to have a shadow box effect, with the objects recessed. So I kept the cut-out around those objects simple.

I decided that adding my father's name was important to this specific display. So I had a local store engrave in silver his name and military rank on a dark plaque. This was put bottom center of the arrangement. 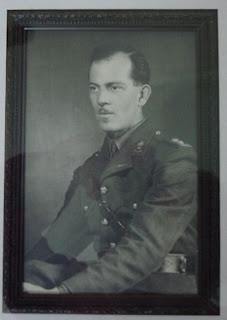 For my dad's photo I wanted more definition, so I had the framing shop add a second smaller frame which mirrored the larger frame around the entire grouping. Size is important, so be sure you don't choose a frame that is too wide or too narrow. Everything needs to be in balance to create a nice composition for your heirlooms display.

In this grouping I opted for a dark, semi-masculine frame with details, an off-white (ivory) mat and a light grey for the inside mat used under the medals, cap badge and name plaque. 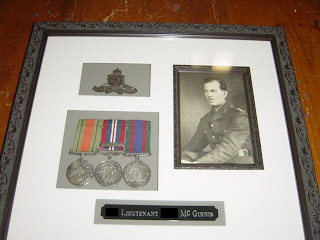 When my display was framed and returned to me I was thrilled. I wrote out the details about my father on paper and fastened it to the back of the framed piece. Then I hung it on my wall where I see it every day. Yes the medals are slowly tarnishing with time. But that is unimportant to the idea behind keeping all the treaures together.

My son knows this will be passed on to him to be the next keeper of this family heirloom. Hopefully he will pass it on to his son and so on, so that future descendants will always have this memento of my father.

Please note: It was difficult to take a good photo of this display as the glass caused reflections. Thus some of my photos which I have uploaded here for illustrative purposes may not show the detail I hoped they would. Also I blacked out in a graphic program parts of my father's name plate, so it looks a little off center in the illustrative photo I took.
at September 06, 2008

What a wonderful tribute to your father! I have all of my grandfather's service ribbons & medals from WWI until he retired in the early 50s. Quite a few are in a frame but I haven't figured out what they are all for.

If you sent for your grandfather's Service Records file from WW1 you could find out what medals he was given.

Also if you took a good look and wrote down everything written on each medal (front and back) you could find out.

Is this in Canada or USA? If Canada, I can help you with that as I have a book on the medals, cap badges, etc for WW1. Also my husband is a WW1 buff :-)

Thank you for sharing that story. I that it was not only a fitting tribute to your father but also an example of your skills as a family genealogist and trying to incorporate that into your everyday life. That showed alot of creativity.

A home run Lorine! Also, my father-in-law who fought during the Korea Conflict actually took it upon himself to locate a vendor recommended by his local VFW (Veterans of Foreign Wars). Several vendors sell picture box cabinets in which you can mount your medals, patches, photos etc. - or if you send all the items to them, they will do the work for you.

This was after my father-in-law petitioned Congress for some medals he never received. I am now trying to find the video clip of him with our local Congressman Rahm Emmanuel being given the medals in person.