The Value of Military Records

Having found the photos of Ern and Cordelia Simpson sailing on board SS Canada from Liverpool to Canada in 1923 in my mother's papers, I was distracted from unpacking my mother's 11 boxes and now intrigued by what else might be in Doris' Genealogy Box!

I continue looking through Doris' Genealogy Box. For those who have not been following this story, Doris was my mother's cousin (my grandmother and Doris' father were brother and sister) and on their deaths all their papers, documents and photographs came to me for safe-keeping and sharing. 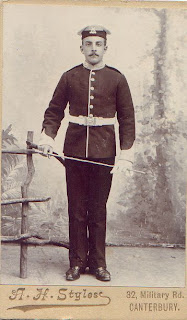 I hadn't realized how many documents there were about Uncle Ern. This is an early photo of him taken in Ramsgate England. I'd looked at his papers, skimmed through them, but never sat down to put the pieces together or think about them in any depth. The number and variety of his military records was astounding.

I soon discovered that Uncle Ern was in the 1st Battalion Kent Buffs in Ramsgate England. The Kent Buffs have an impressive military history going back hundreds of years. 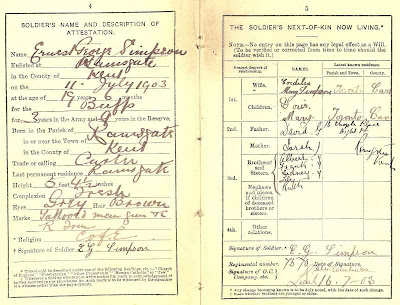 But the real value in a genealogical sense was the discovery of Ern's Military Book which listed his wife's name (including her maiden name), his parents and his siblings, and their places of residence! Wow. There was his sister (my Grandmother) by name - Ruth. Had I not already known my grandmother's parents' names what a find this would have been. It just goes to prove that searching a sibling in depth can often turn up details that relate to your own direct ancestor.

Organizing a timeline of the military documents relating to the Kent Buffs in my possession helped me to understand Uncle Ern's time with that outfit: 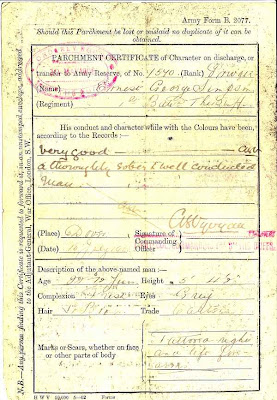 1903. Age 19 years 6 months. Joined the East Kent Regiment "The Buffs" in the 1st Battalion. His character is noted as "very good, a thoroughly sober and well conducted man" He is 5' 4.5" with tattoos on both arms. 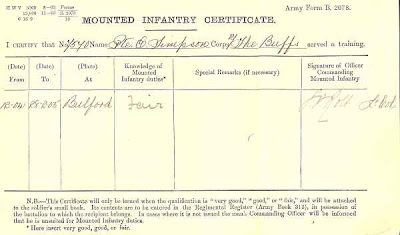 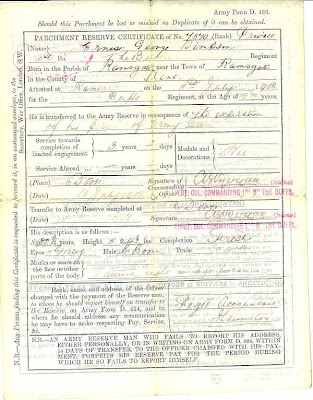 1906. Age 22 years 6 months. There are two military documents concerning Ernie's transdfer to Army Reserve from 1st Battalion, The Buffs. There is a Certificate of Transfer dated 10 July 1906, a certificate for being in the Army Rserve dated Dover 10 July 1906. 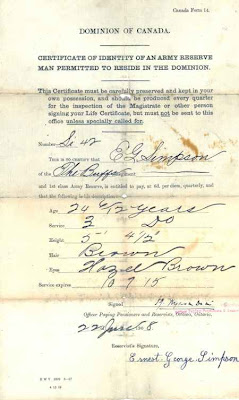 This certificate allwed Ernie to live in Canada. This paper indicates that Ern's military service to date consisted of 3 years in the Army (1905-1908) and 11 years 82 days in the Reserves. This means that he joined the Army Reserves or the Kent Buffs in 1895 at the age of 13, however I found no papers or records before 1902 in Doris' Genealogy Box 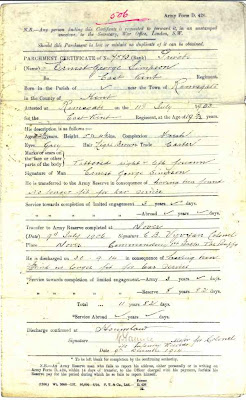 1914 Next I found a Certificate of Discharge for Ernie dated July 30, 1914. It states that he attested to the Buffs in Ramsgate on 11 July 1903, was transferred to the Reserve Army on July 1906 and is no longer fit for service. His character is once again noted as "very good, a thoroughly sober and well conducted man"

Ern's military career did not end with the Kent Buffs or his immigration to Toronto Ontario Canada. During WW1 he was posted to the historical Stanley Barracks in Toronto Ontario as a Guard, then the Royal Canadian Army Veterinary Corps after WW1.

I will write more on those two stints in these historical units plus his court-martial for letting a prisoner escape from Stanley Barracks, in a later posting.
at February 05, 2009

Aren't these records great?! I've written 2 articles (so far) in a series on the information that can be found in military records. I'm so glad all of this is coming together for you! and so sorry that you've had to pack up your mother's home under the circumstances.