It seemed fairly easy to order although there were some areas where I was not 100% sure what information I needed to provide. But I read everything carefully and filled the online request out as best I could. A lot is filled out automatically for you once you find a hit and choose to order the documents for that hit. It did seem a bit expensive for what I thought I was ordering (and note the word "thought"....) but I wanted the documents on Thomas badly enought to go ahead. Since it was expensive to have documents mailed I chose the option to have the images uploaded to the website where I had 30 days to download them to my computer.

After ordering what I thought was anywhere from 1 to 5 pages on one specific individual (Thomas Blandon), and waiting for 3 months, I received 864 images - the entire microfilm! Where did I go wrong? How did I end up ordering the records for over 800 soldiers instead of just my Thomas Blandon?

Let me walk you through the process as perhaps I can save others from making the same mistake(s) I did. 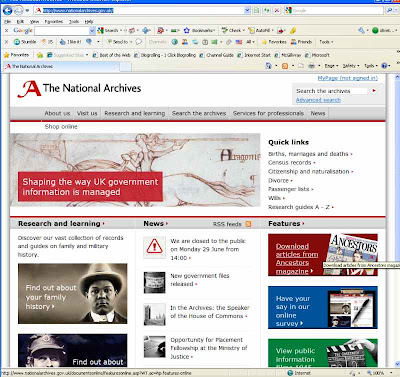 I used the search box top right which is a quick search and entered "Thomas Blandon". Several hits appeared and it is the second one down that I wanted. 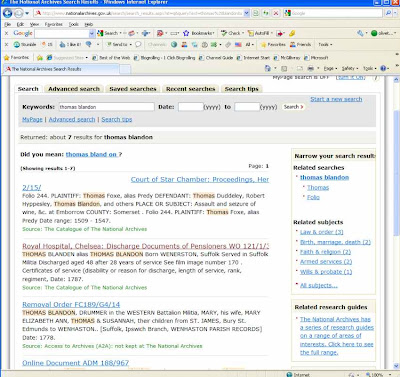 The next step was to click on the link title Royal Hospital, Chelsea: Discharge Documents of Pensioners WO 121/1/38 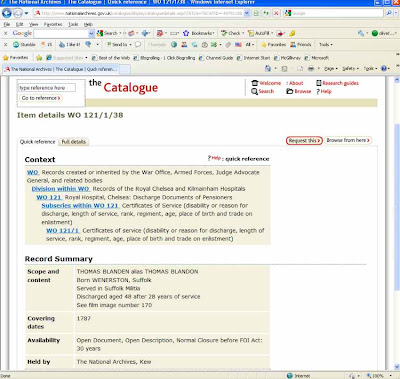 This took me to a page which explained the scope of the records, the dates, whether or not it was available publicly and where it is held, in this case, the National Archives in Kew. On the top right, outlined in red is a nice little button labelled "Request This" You simply click on that button and you are taken to a page where you may choose to request an estimate for a printed or digital copy. I had to create an account with the Archives before I could place my order or get my estimate but that is very easy. 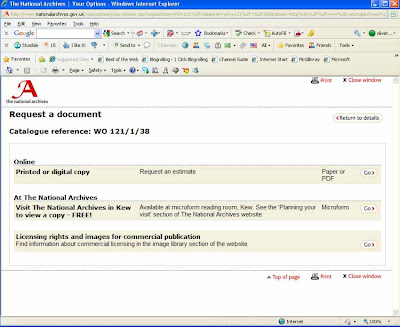 I requested the estimate and soon after received an email from the Record copying department with a link to where my estimate could be found. I looked at the estimate, thought it was a bit expensive but decided to go ahead with the order.

That sounds like something I might do. How do I know this? I've done something similar before, but luckily it was a free service or else I really would've been in trouble.

Still, it was confusing.