How many times have you taken a careful look at your genealogy research only to realize that you never did get around to hunting for Great Grandpa Joe in the 1850 or 1851 census? Have you ever taken a good hard look at the chronology of the family you are searching? How often have you looked over your genealogy research? You might be very surprised at the clues and facts you've missed along the way!

But how can we organize our research so that it's easy to see what we have, what we still need to find, and what we've missed?

This is where CSI Genealogy comes into play!

With CSI Genealogy you create CHARTS to have a SUCCESSFUL INVESTIGATION into your family tree.

Using Excel I created empty columns for each census year. On the left I have empty cells for name of husband, wife and children. I also left spaces for "others" meaning anyone else who shows up on a census year. 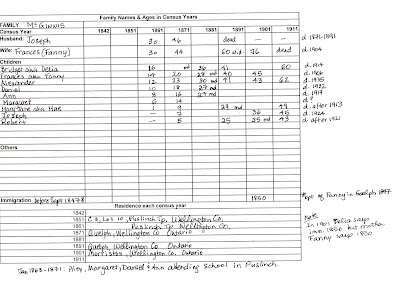 So I find my McGINNIS family in 1861 and carefully list their names and ages. I do this for every census year. This helps me see at a glance who I am missing, what census year(s) I still need to find and when an ancestor goes missing or dies.

You may notice the tiny notations in 1881 column on this chart. These indicate "married" (md) and are just my way of knowing I need to look under a married surname for women. I also note it for males just to have a quick reminder that a son is married and may not be living with his parents that year

Because some census years ask for citizenship or immigration status, I have a spot for that too.

Lastly, I like to keep track of exactly where the family lived each census year. I only list the parents' location on this chart, but I have another chart for locations and land records that I'll show you another time.

Because there is room, I have noted death years on the right (but I'm creating a new chart which will have a column for death year and another for death location). I've also made notes which remind me of important facts. On this chart for my McGINNIS family, I've noted that their daughter Fanny was baptised in Guelph in 1847. That indicates to me that they should show up in the 1851 census but as you can see, I have not found them.

I'm not likely to find them as the first page of the census I need is missing - and I suspect they were on that page! But I still want to be reminded that they were in the area as early as 1847, because I may want to hunt for other records that will provide more information regarding their settlement year.

Every time I pull this chart for my McGINNIS ancestors out, I am reminded that I've never been able to find Joseph, his wife Fanny and their four youngest children in the 1881 Canadian Census. Yes, I've looked in 1880 American Census too with no luck.

I may never find them - they may have been on the move and missed both census years, or the Fanny and son Joseph I found in Guelph *might* be the right ones (and Joseph Sr might be dead by then, but then where is young Robert?) or ..... At this point I have no explanation but this chart very nicely reminds me to KEEP LOOKING! And if I never find them on a census for those years, perhaps I will find them in another genealogy record.
at February 25, 2010