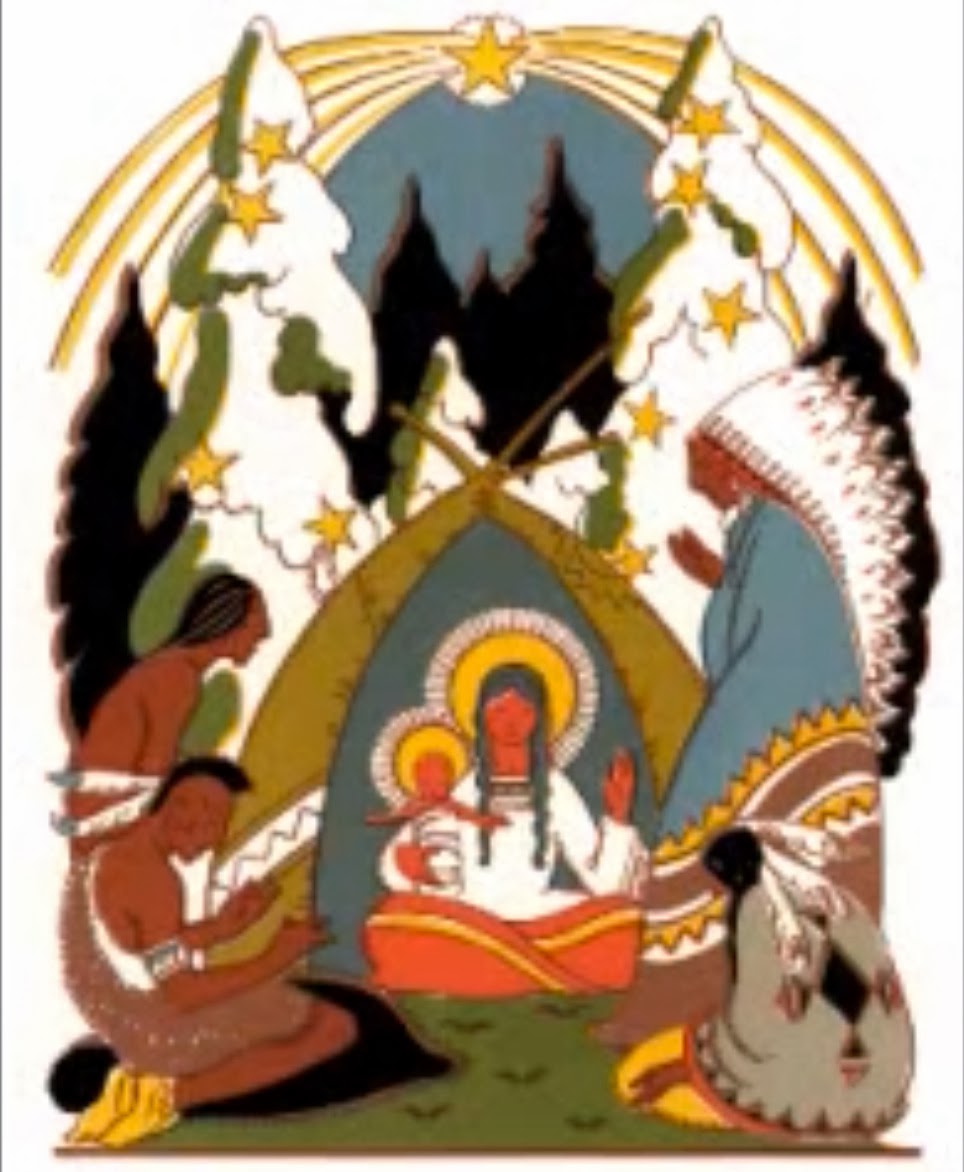 A few years ago I wrote about this beautiful Huron Christmas Carol. I love it so much I'm bringing it back. It is the first Canadian Christmas Carol  written by the Jesuit Missionary Jean de Brebeuf circa 1643 for the Huron Indians in the wilderness of what is now Ontario. The Jesuits ministered to the Hurons at Ste Marie - a wilderness fortified village.

In 1649 the Iroquois, enemies of the Hurons, attacked and the Jesuit fathers set fire to the village fort rather than see it fall into Iroquois hands. Father Brebeuf and 7 others were tortured and killed by the Iroquois. The eight martyred missionaries were canonized by Pope Pius XI in 1930, and are known in Canada as the Canadian Martyrs.

The village has been reconstructed at the original site and is now a living museum as well as complete working village. Ste Marie Among the Hurons is a very popular tourist attraction in the Georgian Bay area and it is not far from my home.

Written in the Huron language, Father Brebeuf's Huron Carol is called Jesous Ahatonhia meaning Jesus is Born. It was not translated until the early 1900s at which time it was translated to French. In 1926 it was finally translated to English. It is still a very popular hymn sung by Canadian school children and in churches. The English version is called "T'was in the Moon of Wintertime" and it is a haunting melody based on a 16th century French Canadian Melody.

I love this carol, I find it very stirring and can picture the Hurons sitting with the Jesuit fathers in the middle of our cold snowy winters, listening to the missionaries sing. As well it has many meaningful connections for me - first, I live near Ste. Marie Among the Hurons. Secondly, Father Brebeuf, now the patron saint of Canada, baptised my half-9th great grand uncle Francois-Joseph Hertel in Trois-Rivieres in 1642 during the short time he was in Quebec recuperating from a broken shoulder. Lastly, I am descended from Francois-Joseph Hertel's half sister Ots Toch, a half Mohawk, half French woman from New York who went on to marry the Dutchman Cornelis Van Slyke. The Mohawk were part of the Iroquois Confederacy, the enemy of the Hurons at Ste. Marie.

As children, we Canadians learn this song in school. It still brings shivers when I hear it.

And now without further ado, here is the Huron Carol Jesous Ahatonhia on video sung in the original Huron language version followed by the French version and a slightly different English version translated by Father Kierans

'Twas in the moon of wintertime when all the birds had fled
That mighty Gitchi Manitou sent angel choirs instead;
Before their light the stars grew dim and wondering hunters heard the hymn,
Jesus your King is born, Jesus is born, in excelsis gloria.

Within a lodge of broken bark the tender babe was found;
A ragged robe of rabbit skin enwrapped his beauty round
But as the hunter braves drew nigh the angel song rang loud and high
Jesus your King is born, Jesus is born, in excelsis gloria.

The earliest moon of wintertime is not so round and fair
As was the ring of glory on the helpless infant there.
The chiefs from far before him knelt with gifts of fox and beaver pelt.
Jesus your King is born, Jesus is born, in excelsis gloria.

O children of the forest free, O sons of Manitou
The holy Child of earth and heaven is born today for you.
Come kneel before the radiant boy who brings you beauty peace and joy.
Jesus your King is born, Jesus is born, in excelsis gloria.

Thanks to FootnoteMaven for having her Blog Caroling Christmas Caroling again this year.
at December 22, 2013

Thanks for posting this wonderful Canadian carol. The English translation in the sung version is very different to the version that I know. The way it is sung is quite beautiful.

Wonderful song, thanks for sharing!

Wonderful song with powerful music. Loved it in both languages. The singers voice is beautiful! Thanks for sharing!

That was beautiful. Thanks for sharing.