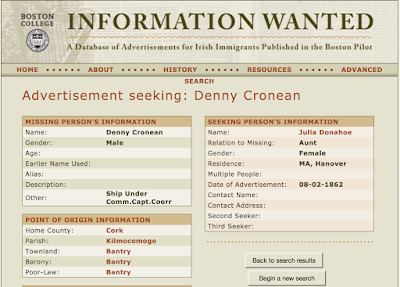 Great news for those searching Irish ancestors!  A new project sponsored by Boston College’s Irish Studies Program and produced by the Office of Marketing Communications
has digitized the Boston Pilot's Missing Friends Column covering 90 years of Irish individuals seeking information their friends or family members who left Ireland for N. America. This explanation from the website:


From October 1831 through October 1921, the Boston Pilot newspaper printed a “Missing Friends” column with advertisements from people looking for “lost” friends and relatives who had emigrated from Ireland to the United States. This extraordinary collection of 41,249 records is available here as a searchable online database, which contains a text record for each ad that appeared in the Pilot.

Back in May 2010 I published a blog post about a new OliveTreeGenealogy.com project called  The Missing Friends Project. My goal was to extract the names of those who immigrated from UK to America or Canada and who were inquired about by family in various 19th Century newspapers.

My Missing Friends Project starts with Lloyd's Weekly Newspaper, published in London England and their weekly column (1886-1900) called "Long Lost Relatives". I also began extracting names of those in the Boston Pilot, published in Boston Massachusetts (1831-1921).

Thanks for this post. Those databases will be immensely useful. One of my own on-going projects is an index to various series of 'missing friends' records for people born in Ireland, the United Kingdom, USA, Canada, western Europe, Australia, New Zealand, etc.

Judy, thank you for your comment and providing a link to your index project! I had a look and you have done a lot of work!

Thanks Lorine - a link would be much appreciated. You can reach people that I can't.

Hi Lorine,
Thank you for all the work you do! I recently took over as the newsletter editor for the Ireland Special Interest Group of the Ontario Genealogical Society and am wondering if I could make use of your blog on the Missing Friends Database in our next newsletter? I will of course credit you and put in a line directing members who are not familiar with your blog (?!) on how to start following you. Please let me know if you are okay with this. Happy New Year, Dawn Kelly