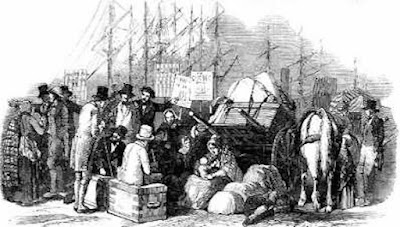 Do you have ancestors from Londonderry or Antrim Ireland? Lists of Emigrants Extracted from the Ordnance Survey Memoirs for Counties Londonderry and Antrim are now available on Olive Tree Genealogy website. See Irish Emigrants 1833-1839

Indexes of names with page numbers for full details from the published book are now on Olive Tree Genealogy. The indexes consist of 8,713 names of Irish individuals who were listed in the Ordnance Survey of Ireland for Londonderry and Antrim Ireland and who emigrated from Ireland between 1833 and 1839.

The purpose of the Ordnance Survey of Ireland was to map the whole country. Each map was to have been accompanied by memoirs for every civil parish, but this was impractical and the idea was abandoned. Data was gathered for nineteen of Ireland's thirty-two counties, with the memoirs of Antrim and Londonderry the only ones with lists of emigrants.

These extracted lists identify the emigrant's destination and his place of origin in Ireland. The age, town and address, year of emigration, and religious denomination are given for each emigrant.

The notebooks in which the information was recorded are now in the Royal Irish Academy in Dublin. The book Irish Emigration Lists, 1833-1839, Lists of Emigrants Extracted from the Ordnance Survey Memoirs for Counties Londonderry and Antrim by Brian Mitchell is available in many libraries (In Salt Lake City Library it is 941.6 W2m and is available in FHL US/CAN Book and FHL BRITISH Book ) or it can be ordered through Amazon.com for full details on any immigrant found in the index.