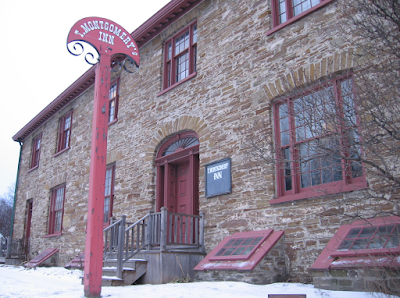 There is a historical site run by the Etobicoke Historical Board on Islington Ave. in Toronto known as Montgomery's Inn. The Inn was owned by our William Montgomery's brother Thomas.  A great stroke of luck has meant that the Inn has quite a bit of correspondence between the different members of the Montgomery family.

The inn has a letter from William Montgomery,in Durham Quebec, to his brother Thomas, in York, concerning his children.  It isn't dated but would probably be around 1860.  It was invaluable in terms of knowing who is daughters married and where those that left Durham ended up. It is interesting to note how the two brothers, living some distance apart, wanted to make an effort that their two families know about each other.

This letter is displayed at the Montgomery Inn at the corner of Dundas St.and Islington Avenue

From a blurb on the Inn, "Thomas Montgomery was a young man when he emigrated from County Fermanagh, Ireland early in the 19th century. He brought with him, however, a good head for business.  ... Thomas' account books show that whiskey was the most popular drink, but that he also sold peppermint an shrub (mixed drinks), beer, rum, brandy, white wine, port, gin, 'sider', and, one one ocassion, a hot brandy sling. ... During the surge of patriotism that followed the Rebellion of 1837, Thomas obtained an officer's commission in the local militia, eventually rising to the rank of Captain".

"Dear Brother if God spares, nothing will be wanting on my part in making our offsprings, ? acquainted, that they may know to cherish and feel for each other where ever they meet on this earth, happy you are the first to  introduce this most natural introduction of everlasting knowledge of friendship and unity handed down by your  proposition, and suggestion, which I with heart felt pleasure acquiese, and I know brother Johnston say he will also.    I will give you a copy of Journal, of all my childrens names and age of births.

Brother in next I will try and give you an account of my grandchildren.
Samuel Ployarts father died last fall, his  uncle in Germany died previously and left a great legacy to his father, brother and sisters two old maids, there is to  come Sam 440 and some pounds.  I know you and Mrs. will be glad to hear Margrets welfare, they have 3 children.  Sam and brother Fredrick is now the Sensus of the township.  I have pleasure in the connection."
at June 04, 2018