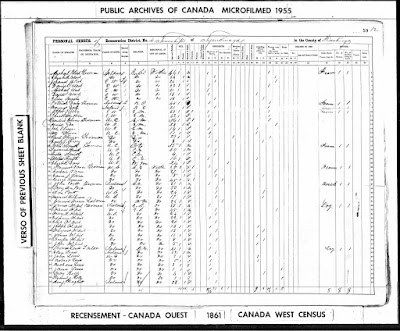 Bob S. asked about a challenging ancestor named John Smith. Since Bob's query was very long, I took bits and pieces to respond to.

I have hit a brick wall with with my 2nd great-grandfather John Smith. Based on information that I have been able to find he was born between 1817 and 1826. Most information said that he was born in Canada, but his sons death registration said that he was English. He was a widower when he married my 2nd great-grandmother, Susannah Powles(s), on Jan. 13, 1856 at Christ Church, Tyendinaga, Hastings

Bob - First let me say what terrific research you have done already on this elusive ancestor. I am sorry I can't include everything you sent me here in this blog post.


I found a property owned by John M Smith but it said it was Lot 37 in Concession III.  Think that it is the same Lot/person because of proximity but am not familiar with these records.. I also tried looking for property that John Smith indicated on 1851Census.  I think that this is my John Smith but am not positive.  He listed in column "Residence if out of Limits" as "4th Con Richm"  which I interpreted as IV Concession in Richmond, Lennox County which is adjacent to Tyendinaga.  Searching the map for Richmond, Lennox at http://digital.library.mcgill.ca/.../fro-m-richmond.jpg.  I found a J Smith listed as owning property in Concession III Lots 13 and 14 on the 1880 map.  I am not sure if we would have retained that property (if it was his).

The first thing I want to suggest re this land confusion is that you consult land records. I have written extensively about searching for land records in Ontario and you may wish to familiarize yourself with what is available for Ontario Land Records. I suggest you start with the CLRI and also the Abstract Indexes to Deeds for all these properties you have found.

There was a property dispute between Susannah's children and grandmother and Indian Department has file that mentions the property description (part of Lot 38 Con 2).  I think that I have found this on the maps linked to the OliveTree website but the location appears to be off somewhat (lot 37 Con III).  Are these the same lots just different descriptions?

No those are not the same lot but they were close, perhaps even bordering on each other. Each farm could be quite large so conceivably the lots could touch even though they are on different concessions.

Next - I took a look at that 1851/52 census for John who was visiting other Smiths. I suggest you formulate a theory (which you will work to prove or disprove) that they are his relatives, and quite possibly close relatives such as a father (or mother) and siblings. Research each of the Smith individuals found there and try to find something that links them to John. The following articles may be of help to you.


From Theory to Fact: 30 Years in the Making

Turn a Genealogy Guess Into a Working Theory

Assumptions vs Working Theories - The Good and the Bad

Also, you no doubt noticed the "F" in the column for Place of Birth for those Smith individuals in that 1851/52 census. You didn't ask what it meant so you may already know this, but for those who do not know, here is the official explanation in instructions to census takers in 1851:

"The BIRTH PLACE of each person: you will here note that those born of Canadian Parents are to be marked with an F." [Source: http://www.prdh.umontreal.ca/census/en/uguide/enum_1852.aspx]


This is a coffin plate. These were engraved with the deceased's name and death date and sometimes with more information, then placed on top of the coffin during the funeral. After the funeral, the plate was given to the family as a memento. You can read more about coffin plates on the AncestorsAtRest website where over 450 are shown with photos.  It is very possible that John's death was not registered. Even though it was mandatory to register a death, many people did not comply as it cost money and sometimes the trip to the Registry office was too difficult to make in the winter.

I suggest you try church records for the burial information. Check the census records to find out what religion John was, then look to see what church he might have used. Then check Ontario Archives to find out if that church has any surviving records.

I feel that your best bet is to trace those other Smiths John is visiting in 1851. It will be a lot of work but I believe well worth it. Check and compare every record you can find for them, including John. Are their similarities in the names of their children? In their places of birth? These are just a few of the questions you might ask yourself.

Something to remember when consulting Canadian land records is that a Concession contained land on 2 roads. Unfortunately the roads bordering the property were also called Concessions. My family owned property called the North 1/2 of lot 3 of Concession 5. We actually lived on Concession 6, which was the road bordering the north side of the property. Lots of times records such as the Census will record the road as the address, therefore the property owned may not be the property recorded on the census.

I have a dead end John Smith b.1754 Dunbarton, New Hampshire who went to Canada with his mother and step father in 1784. Could he be connected? As far as I know everyone who evacuated stayed there.