E is for Explorer - Do You Have One? 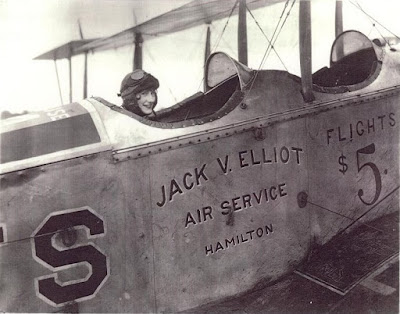 Today's letter is E and the tag word is Explorer. I don't have any explorers like Columbus or Henry Stanley but I do have Eileen Vollick, Canada's first licenced female pilot. Perhaps I can call her an Explorer.

"Canada’s first licenced woman pilot was born in Wiarton, Ontario. By the age of 19, she was a textile analyst at the Hamilton Cotton Company and had also won a local beauty contest. She was a spirited girl who had parachuted into Burlington Bay before taking flying lessons. It was 1927. Charles Lindbergh had just flown the Atlantic and Amelia Earhart was beginning to capture the public’s imagination. The diminutive Beach Boulevard resident had already set her sights much higher than anyone could have imagined!

Read more about this pioneer woman.

Indeed, I do have an explorer in my family tree. Pierre Esprit Radisoon is my 7th great uncle. He was a man of many talents and his lasting tribute is that of being a founding member of the Hudson Bay Company along with his brother-in-law, Medard Chouart Des Groselliers. Their contributions to the fur trade are well documented.

That is very cool! I have not found a genuine 100% explorer in my tree but there's always hope.