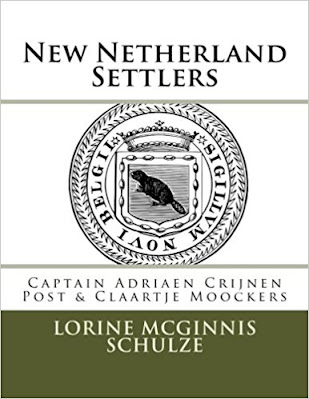 My 9th great-grandfather, Adriaen Crijnen (possibly Quirijnen), Post was most likely from The Hague, Netherlands. He and his wife Clara or Claartje Moockers, resided in Brazil in the West India Company's colony.

From 1630 to 1654 (24 years!) , Recife, a Northeastern city in the Atlantic coast, Brazil, was holded by the WIC (West India Company);   In 1637, the WIC directors realized to put a General Governor at the head of the brazilian colony or The Dutch Brazil (also Nieuw Holland):  the Count Johan Maurits van Nassau-Siegen (House of Oranje)who stayed there for 7 years and besides the obvious interests on the prosperous sugar trade from Brazil to Europe, he leaded a staff formed by scientists; architects; astronomers; biologists; artists, cartographers; etc., all of them taking part on the raise of a new town named Maurits-Stadt in his honour.  This town was builded in an island (Island of Antonio Vaz), contiguous to the port of Recife, original site of the present metropolis.  Among these advisors of the Count: Pieter POST, Archite

Adriaen's daughter Maria (my 8th great-grandmother) was baptised in Recife Brazil in June 1649. By the time Brazil fell to the Portuguese in 1654, the family had left for the Netherlands. On 30 June 1650 the ship "New Netherland's Fortune" sailed, arriving in New Netherland on 19 December 1650.

Adriaen and his family were on Staten Island by 1655. Adriaen was a representative of Baron Hendrick van der Capellen, the owner of one-third of Staten Island. As the superintendent of a group of twenty people who were to farm Staten Island, Adriaen set up a colony which flourished.

Read more about Adriaen at https://www.olivetreegenealogy.com/nn/surnames/post.shtml