Please see the first entry and photo from Ada Harland's Diary which I began transcribing a year ago. Ada's daily entries are repetitious and brief and difficult to follow as she uses abbreviations and letters (almost like a code) probably due to space limitations. Included with the diary and photo was this letter from the man who eventually became Ada's husband.


Another day has passed into the limbo of forgotten things, likewise the record of an eventful year is closed. Today your letter arrived, a letter which means so much and yet is all to [sic] brief. Would you think me rude if I condense this letter somewhat.


Last night was New Year's Eve, and the boys celebrated by getting uproariously drunk, and made it an all night session. Only Rowe and myself refrained from participating in the festivities, and consequently were dubbed "Sissies".


Billie Brierton [see FN 1] early succumbed to the potent libations and by 10:30 I had him into bed where he remained entirely oblivious to the racket until this morning. To sleep was out of the question, so Rowe who is laid up with a poisoned knee, and myself had a long talk, and with the exception of a trifling disturbance the night passed uneventfully.


This morning the effects of the night's debauch were all to [sic] plain to see. E. Coy. [Company] cook staggered into the Cook House and asked me to get breakfast ready for his men as well as my own. All day I have done double duty cooking for 250 men practically without assistance, and to tell the truth I am just about ready for a good night's rest.


Your letter makes me realize what a selfish brute I really am, here I have been writing page after page about my own disappointment at leaving you, yet never have intimated in any way, or even allowed for the possibility that you thought so well of me.


What I have done to deserve such a love as yours I do not know, nor cannot conceive, to know that you love me is enough, and I will do everything I can and so conduct my life as to make myself worthy of this great love of yours.


There is no danger whatever of my assaulting your friend the Orderly Corporal although my fingers itch to get a hold on him. You see it is a serious offence to strike an N.C.O. [Non Commissioned Officer] and means a long term of detention.


Yes, the handkerchief bears your initial and I sahll carry it with me through the days to come, as Knights of old carried the gage of their lady love.


Now dear heart I must write, goodnight and take you in my arms for that long lingering breathless kiss you wish and hold you colse to my heart for the rest of time.


With all my love, from
Your own
Bert xxxxx


PS The Princess Pats have been in action and lost heavily. We expect to go within the next two weeks, and go to the firing line direct 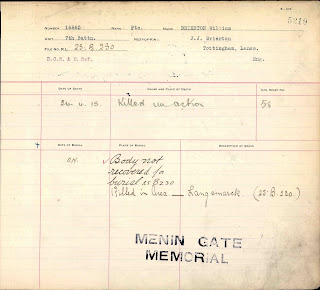 Sadly Billie Brierton (whose name was William) did not survive the war. His death is found in the CEF (Canadian Expeditionary Forces) War Graves. He was killed in action in France on 24 Apr 1915 and his body never recovered.

Billie's Attestation papers are online. He was 25 years old when he enlisted in 1914 and was sent to the same regiment as Bert.

What a wonderful letter! I love those first hand glimpses into the past that letters give us. I'm glad Bert survived.

Lorine,
Thank you for sharing this letter. It's not often I get to read a first-hand account of a soldier falling in love with his wife to be. I was surprised they waited so long to get married, though.

My favorite part is "What I have done to deserve such a love as yours I do not know, nor cannot conceive, to know that you love me is enough, and I will do everything I can and so conduct my life as to make myself worthy of this great love of yours"...the words of an honorable soldier. Thank you for sharing their story!

My favorite part is "What I have done to deserve such a love as yours I do not know, nor cannot conceive, to know that you love me is enough, and I will do everything I can and so conduct my life as to make myself worthy of this great love of yours"...the words of an honorable soldier. Thank you for sharing their story!