Clues Galore in Photos in the Orphaned Kirby Photo Album, But Do They Help in Identifcation?

Continuing on with my journey of discovery into the identities of the people in the Kirby antique photo album I soon realized this was going to be a difficult challenge. There were so few clues to go on!

So my husband suggested we try to figure out where each photo was taken. The early Cartes de Visite from 1860 and 1870 and most of the 1880s and 1890s cabinet cards were all taken by photographers based in Yorkshire - Driffield, Sheffield, Leeds, Bridlington Quay, and Filey.

The 1920s photos were not studio photos, they were taken with home cameras and had no locations except for one which was stamped Brantford (Ontario Canada).

Our first step was to scrutinize the 1920s photos with a magnifying glass to look for obscure clues. And slowly we were able to sort those photos into three separate locations based on vegetation in gardens and yards, architecture, shape of windows in background houses, shape of doors in background houses, snow (indicating a northern climate), a car with a driver (steering wheel on left, not right so not England), etc. 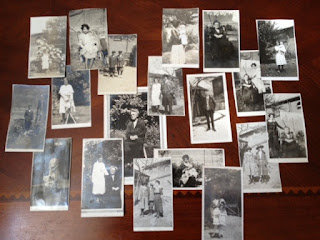 We determined that Location A consisted of 18 photos taken in a back yard and the front yard of one house ca 1920s. Bits of the same house appear in all these photos. We could see identical brickwork, plants and architectural details. Some of the individuals were obviously the same person. One was the photo labelled "Lillian & Baby Donalda".

Some of these photos showed that the street was filled with attached homes and the home at this location was a large brick home. We believed it was taken in N. America, most likely Ontario. 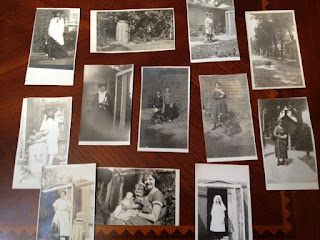 We determined there was a second location - Location B consisting of 12 photos taken at a different home - a small house with large trees. The houses on this street were not attached. Every photo in this location had a dog in with the people and one photo was of the dog alone and on the back was written "1920 Buster" It is interesting to note that the photos in Location A had some of the same individuals we could see in Location B but Buster did not appear in any at Location A.

We brainstormed a couple of ideas and theories:

1. Buster belonged to one person/family living at Location B and was never taken to Location A
2. The pictures represented one family who moved from A to B (or B to A) and the reason Buster was only at one location was that he died or they got him after they moved.

Location C was a different location which consisted of only 3 photos taken ca 1920s. They had the same number stamped on the back (77) which indicated they came from the same roll of film so they were connected.  And each one had something written on the back.

One was an elderly woman in a long black coat or cloak labelled "Mother is 76 years and growing younger every day" We noted that this was not the same elderly woman in Location A and D Location. This tiny bit of writing gives us a small clue to the elderly woman's year of birth. Assuming ca 1920-1930 as the date the photo was taken, her year of birth might be 1849 give or take 5 years.

The second was a photo of four women labelled "four generations"

The third was a group photo of several individuals labelled "The whole [J?] family" We think the initial is "J". This photo shows the same elderly woman (Mother) and one of the woman in the photo labelled "four generations" so my bet is that she is the daughter of 76 year old mother. If it is a family group, the man could be her husband and the children could be theirs.

LOCATION D
There was a fourth location which had photos of Buster the dog, and an elderly woman. This elderly woman also appears in photos in Location A but not B.

We became pretty convinced that the Kirby  Photo Album began its life in Yorkshire England and ended up by 1920 or earlier in Ontario, possibly Brantford. I also started to wonder if Maude M. Kirby was the first owner and then the photo album passed into other hands, possibly a daughter.

I should stress that this investigation has taken my husband (Brian of AncestorsAtRest) and I days. It's not a quick or easy task and it's definitely not for the faint-hearted! But we love doing it.

Some theories are developing which will be up to me to research to either prove or disprove. I've searched just by first names found on the few photos with any identification. That has not been successful so I plan to narrow my search to Ontario. I will also try "guessing" at the surname, using Kirby which is the only surname in the album for the family. So all photos with first names will be searched adding the theorized surname of Kirby.

My journey of discovery continues and through this blog I will share the clues, the discoveries, the successes and the failures in my hunt to discover where this album belongs and what family held it so dear for over 60 years. Readers can follow along with me by using the link for Kirby Photo Archive
at June 04, 2013

How exciting! Your enthusiasm is contagious. I did a search on ancestry.ca for Kirby born in Yorkshire and lived in Brantford. There is a Wake Family Tree with lots of photos, and one is obviously from a fancy floral album. Have a look.

While reading your interesting post, I had the thought that a project like this might be a way to draw in family members and friends who are not into genealogy, but might like puzzles or challenges or geography or contests to see who can figure out what first. And who knows where that initial interest might lead them! :))

The idea of finding clues in photographs is so intriguing. We just discovered an tintype photo of a civil war soldier, but can't figure out who it is. In our tree, there's a father and son who both fought and died within a week of each other.