The Orphaned Kirby Photo Album Has Found A Home!


Continuing on with my journey of discovery into the identities of the people in the Kirby antique photo album I was able to develop a theory that the album began life in Yorkshire England and then ended up in Brantford Ontario.

Hubs and I matched photos - we put together all photos that we were sure were of the same individual and tried to work out dates and locations to help. It was an interesting exercise but it didn't solve anything for us.

Since my searches based only on the one full name in the album - Maude M. Kirby - had not been successful, and my searches using only first names as found on some photos, with my guess as to location likewise had not worked, I decided to search on Ancestry.com 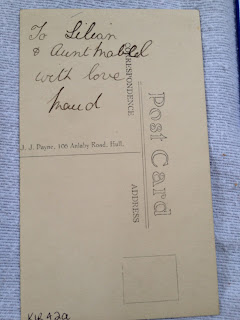 I narrowed my searches to Brantford and used the one bit of writing I thought was a clue - a photo of a young woman which she had obviously sent to a loved one, for on the back she had written "To Lillian and Aunt Mabel with love Maud"

I had found a Maude Marion Kirby living and dying in Yorkshire England but she died in 1901 and this photo signed Maud was taken ca 1920s so they could not be the same person. I'd had a glimmer of an idea that Maude Marion Kirby might have been the original owner of the photo album and on her death perhaps it passed to her mother or someone else in the family.

So I made a huge leap (assumption) and theorized that Lillian might be this Aunt Mabel's daughter. So I started my search on Ancestry.com

for any mention of a Lillian with mother Mabel in the Brantford area.

Bingo! A Family Tree had a Mabel Kirby with daughter Lillian who came to Brantford Ontario from Yorkshire in 1911. They were joining Mabel's brother Tom Kirby. And Mabel's mother Mary Kirby was with her. And Mabel had a sister named Maud Marion who died in 1901. My gut told me this
was the right family but I managed to contain my excitement while hubs and I compared information and photos in the online Tree with whatever bits and pieces were contained in the album I bought.

There were no definite 100% proof moments but there were enough similarities to convince both of us that we had the right family. So I wrote to the Tree submitter and told him the story of the album. I included some first names and gave him my private email so I could send him copies of some photos to see if he thought it was his family.  He responded immediately and his enthusiasm and excitement matched mine. It was indeed his family!

He filled me in on details. I was  happy to have them because by now I'd become quite attached to the individuals in the photos and wanted to know their stories. It turned out that the album had indeed once belonged to Maude Marion Kirby, who died in England in 1901.

I figured out later that I had a photo of Maude Marion Kirby with her baby son Herbert. It was simply labelled "4 months old" but I knew it was taken late 1890s because of the clothing and hairstyle but also because the photographer George Dear was only at the the Sheffield location until 1899.

Everything was starting to make sense. Maude Marion Kirby owned the album and filled it with photos that had meaning to her. Then she died in 1901 at age 26 and the album passed to another family member - probably her mother Mary Kirby.

When Mary came to Brantford Ontario with her daughter Mabel and granddaughter Lillian in 1911, the album came with them. I suspect that when Mary died, the album stayed with Mabel.

The one puzzle was the photo of "Baby Donalda" with Lillian. I'd surmised that Donalda was Lillian's daughter but I could find no evidence that Mabel's daughter Lillian ever married or had children. The Family Tree owner was able to fill me in. Donalda, (who is still alive, in her 90s and living in Ontario!) was the daughter of Lillian's cousin. The cousin died in childbirth. I do not know at this point if Lillian raised Donalda but am eager to learn more.

And so the orphaned album has found a home. I am mailing the photos to Gordon (the owner of the Family Tree on Ancestry.com

) in England as soon as hubs has scanned them. We've agreed that I can put all the photos up on my Lost Faces website for other descendants to hopefully find.

Lorine, I'm doing a happy dance for you. What a wonderful story! I think we should call you the fairy godmother of genealogists. You and hubs are amazing. You're inspiring me to go to my nearest thrift shop and rescue some orphan scrapbooks.

I hope you get to meet the family some day. Well done!

Lorine, what an amazing conclusion! I was so excited for you! It's so wonderful to hear that a whole orphan album has found it's rightful home! You showed why we have to sometimes take leaps! Great detective work!

I was on the receiving end of an album. So I know how the recipient would have felt being told about these photographs. See my blog genemeet@blogspot.co.uk

Congratulations Lorine! I see it was the Wake Family Tree that I mentioned previously. Interestingly, there are also several W. Mitchells in the tree and perhaps one of them is the Reverend. So generous of you to go to this much trouble.

What a wonderful ending!!!

What a great story, with a successful outcome! Kudos for sticking with it!

How amazing that technology can let us go back in time, so to speak. This was a great story and I love the Sheffield connection, since my grandmother was born there. Kudos!

How wonderful, Lorine! You and hubs make a great genealogy detective agency! So glad you were able to find a home for this lovely album. Great leaps -? That's called knowledge, skill, and intuition. Cheers to you.

A wonderful endeavor ! I always feel so sad when I see old photos in antique malls. So glad to see some that have found their way back home. Good work.

Lorrine, an addendum to this story for you. I believe I have identified the photo of the soldier in one of the photographs you so kindly sent me. His name was William Old (1872-1915) & he was married to my grandfathers older sister Matilda Elizabeth Wake (1873-1958). The soldier in the photo is wearing a Royal Engineers cap badge & William was in the R.E., but no other member of the family was. William died 06 May 1915 of the wounds he received during the second battle of Ypres & was 43 when he died - the soldier in the photo looks to be in his early 40's, so I am certain it is him. Also my grandfather, as part of his recovery from wounds he received in 1918, made a large embroidery of the Royal Engineers badge - the only other one he did was of his own regimental badge (7th Dragoon Guards), so I believe he did this in memory of his sisters husband, William Old. I have also identified a number of other people in those photos & would happily send you my spreadsheet with the names listed by photograph if you would like them.

How wonderful! I would love to see your spreadsheet. Perhaps I can create a new blog post from it.

Just send to my email address given on my VIEW MY COMPLETE PROFILE link.