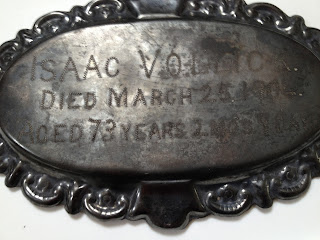 Today I became the very excited owner of the coffin plate of my 2nd great grandfather, Isaac Vollick.

Isaac was born in 1832 in what was then Upper Canada (present day Ontario) and he died in 1904 in Hillsdale, Simcoe Co. Ontario. I've never found his gravestone or burial site, nor his wife's even though I know what cemetery they are in.

I hear you asking "ok what's a coffin plate and why is this a great story?"

Coffin plates were decorative adornments attached to the coffin that contain free genealogical information like the name and death date of the deceased. After the funeral service, these plates were often given to family to take home as a memorial to the deceased.

My becoming the owner of this coffin plate is an amazing story. I call it The Domino Effect, meaning everything had to fall into place, one tiny moment at a time.  Here is how it happened, step by step:

1.  Last week I realized I could not log into my website AllCensusRecords.com as I did not remember my password. No amount of searching found it so I did the usual thing - hit the "I forgot my password" link on my webhost. No problem, they email a new temporary password. But I wasn't sure what email address I had used to sign up on this host.

2. After checking my main email addresses with no luck (no response from the web host) I realized my account must be under a very old email address I haven't used in years. I rarely check mail there even though I do still have access. But off I went and yep, the password was there.

But what was even more interesting was an email, months old, from Gary French, the author of "Men of Colour: An Historical Account of the Black Settlement on Wilberforce. Street and in Oro Township, Simcoe County, Ontario 1819-1949"

Gary was writing to me about my husband's black ancestor, Jonathan Butler, who settled in the Queen's Bush (near Waterloo Ontario) circa 1834. It seems Gary had found some evidence that pointed to Jonathan being originally from Pennsylvania. This was a very exciting lead as we had not been able to find any record of where in the USA he came from. So I quickly replied to Gary's email, hoping he was still interested and still at the same email addy.

3. After a few emails back and forth, I casually mentioned in closing that I thought we had a "sort of" connection, as I knew that a son in his French family married a daughter of one of my Vollick family in Elmvale. When Gary wrote back I almost fell off my chair. This is what he said "..


I am interested in them [the Vollicks] as important settlers in the Elmvale/Orr Lake area. By coincidence, I recently purchased the coffin plate of Isaac Vollick (the one who died in 1904). macabre, but a very Victorian artifact."

I was so excited. Not only was this MY Isaac Vollick (my great great grandpa) but my husband and I collect coffin plates! We have over 200 in our collection and my husband has put many of them online on AncestorsAtRest in hopes descendants will spot an ancestor.

4. Immediately I responded, telling Gary about our own coffin plate collection and how the coffin plate he had was for my 2nd great grandfather. Then I asked Gary to consider selling the plate to me IF and WHEN he ever decided he no longer wanted it.

5. Gary agreed to sell it to me since I had such a strong family connection, even though he does not sell the items he finds which have some connection to Flos Township in Simcoe County. One of his missions is to find and preserve as many historical artifacts as he can for this local area.


And so this morning hubby and I drove to Gary's office and the coffin plate was turned over to me to preserve and cherish. But the story does not end there. I asked Gary where he found the coffin plate and his reply gave me shivers!

He found it in an antique store in Barrie - one which my husband and I go to frequently. The plate had been turned upside down (see photo on right) and was being sold as a tray!

For some reason Gary picked it up and turned it over. To his surprise he realized it was actually a coffin plate for a Vollick! Since he recognized the surname and knew they settled in Elmvale he purchased it to add to his collection of historical artifacts for the area.

And that is how I came to be the very happy and grateful owner of my great-great-grandfather's coffin plate. No doubt his widow Lydia carried it home with her and after her death most likely one of her daughters took it to her home. And so, 104 years later, the coffin plate has come to me. I will have it framed along with a photo I have of Isaac and Lydia, then in turn it will eventually go to one of my sons.

And that is what I call serendipity and an item wanting to be found. 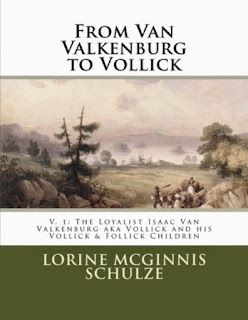 Update: If you are interested in the Vollick family I also wrote three books on the Vollick and Follick descendants of Lambert Van Valkenburg. They are:

From Van Valkenburg to Vollick: V. 2 Cornelius Vollick and his Follick and Vollick Descendants to 3 Generations

From Van Valkenburg to Vollick: V. 3: The Loyalist Storm Follick and his Follick and Vollick descendants in North America
at July 22, 2013

This is absolutely amazing! I always love the journey of searching family history and it is amazing to read all of your findings on your blog. Your information and suggestions and own family stories give me hope that someday I will actually find some answers that I seek. My families are very elusive and I have hit several brick roads. This story gives me faith that the answers are there, just have to keep with it and have patience.

Lorrine, All I can say is Wow! I'm so excited for you.
Rosemary

Lorine, what a great story! Of course he is also my great, great grandfather as well.
All the connections for you to get this are amazing.

So happy for you! What a wonderful story!

A wonderful case of genealogy serendipity!

Glorious serendipity, link by link, for you to find this. I love reading about your successes! Cheers!

Wow, great story! Congrats on getting the coffin plate, that is awesome!

I want to let you know that your blog post is listed in today's Fab Finds at http://janasgenealogyandfamilyhistory.blogspot.com/2013/07/follow-friday-fab-finds-for-july-26-2013.html

Olive Tree Genealogy said...
This comment has been removed by the author.
2:36 PM

Thanks Jana - I appreciate the shoutouts you have been giving my blog posts!

C. Michael - you got that right!

Couldn't have happened to a nicer person Lorine, congrats!

Thanks very cool! As I am also a Vollick. :) Congrats on your find. I'm busy researching our family history. That is why I cam across this. Cheers!