Col. Thomas Talbot was a controversial figure in early Ontario settlement. In the early 1800s in what was then called Upper Canada, Talbot was allowed to dole out land in Elgin County. Every time he gave, at his whim, 50 acres to a settler, he received land for himself.

He made decisions arbitrarily based on who he liked, and single-handedly managed to create a lot of discontent among early settlers. He was often accused of erasing a settler's name from a previous land allotment and assigning the land to someone else, if the original settler displeased him. In fact my own ancestor's brother suffered such a fate under Talbot's despotic rules.

In 1819 Jacob Peer submitted a petition stating that Talbot had granted him land, and promised that he, Jacob, could extend to the land bordering his in order to build a mill. Then Talbot denied that promise, forcing Jacob to purchase the land. To make things worse, Talbot then assigned the land that Jacob owned to another settler.

Here is an interesting excerpt from some of the letters exchanged during Peer's petition.

Letter dated 20 Dec. 1819 from York from T. Rideout to the Surveyor General's Office stating that "how far Colonel Talbot was authorized to remove a settler when once located I am unable to say." Another letter from William Powell to Sir Peregrine Maitland points out that if the petitioner Jacob Peer wins his suit, it could have other consequences and that it is doubtful that Talbot would consider himself accountable to the Board. He therefore recommends that the petition from Jacob be directed to Talbot personally and that Talbot report on it. Talbot writes a  letter dated 30 April 1819 to Wm. Myers stating that "in consequence of your not having moved on the Lot 75 west on the North Branch of Talbot Rd. in Westminster, I have located the said lot to Mary Schram" and that the lot is estimated to be worth 50 dollars which will be paid to him. FN2

Jacob filed many petitions and affidavits from other settlers who swore they had been present when Talbot promised the land freely to Jacob but it was all in vain. Jacob lost his case and was ruined financially, having built a grist mill and saw mill at his own expense on the land he purchased, and which was taken from him and given to another settler. All because he displeased Talbot.

Talbot  made note of villages, First Nations settlements and footpaths, industrial sites such as mills, and early transportation routes throughout the region. The documents also include the names and locations of landowners. FN1. This gives us names and locations of early settlers and will be extremely useful to genealogists. 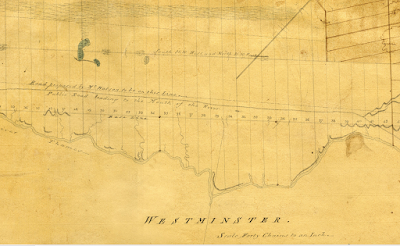 Each of the 45 documents, registered between 1802 and 1849, are available to the public at the archive's website. The complete listing of Talbot's maps is available to historians and genealogists. Elgin County Archives tells us that

The linked listing seems to include most of the Talbot Settlement area - not just Elgin County (although Aldborough and Dunwich townships are missing), but also Kent, Essex, Middlesex, Oxford and Norfolk Counties.

My brother told of a presentation he attended last year, where one of the archivists described the digitization project. Because of the anecdotes of erased and replaced names, they were also going to try advanced techniques to recover those names.

I am glad I finally added your blog to my browser folder containing my list of blogs to read. The Thomas Talbot fonds have been on my To-Do List since a 2012 Archives of Ontario visit. Now they are accessible 24/7.

These maps do cover five present-day counties, not just Elgin.

I learned my possible relative likely got his land through Talbot late in our 2012 visit and at the time these papers were offsite so I would have to wait until the next time we visited or hire someone. Since it was still a possible relative and not confirmed relative I added it to the To Do List for whenever our next visit might happen.

I now know when this possible relative got his land. Too bad there are not other papers like applications/petitions for this collection -- don't know if Talbot used anything like that back then but it would have been nice.

I hope reading those maps doesn't make me go blind!! I wish there were some options for lightening and darkening. But I'm pretty sure I saw Caleb Cook. I wonder if it's MY Caleb Cook! One down. The rest to go. If I find a Ward entered there you will hear the biggest whoop de do as ever in your life!