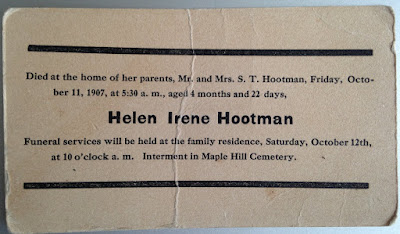 Little Helen Hootman did not live long. She didn't make it to 5 months of life, dying on October 11, 1907 at her home.

This is Helen's funeral card on the left. Her parents' names are given only as Mr. & Mrs. S. T. Hootman, her funeral service was held at home and her burial took place in Maple Hill Cemetery.

A search of Ancestry reveals that little Helen died in Osceola, Clarke Iowa and her mother's initals appear to be D. E.  (Iowa Cemetery Records)

I had one final brief look at Marriage Records on Ancestry and found Samuel Thomas Hootman marrying Dazette Webber. I'm happy to have rescued this Funeral Card for baby Hootman and hope that a descendant of the family will see it. I am happy to pass it on to a family member - just leave a comment here on this blog post with your email address or email me directly at olivetreegenealogy AT gmail.com

If you are looking for a death record of your ancestor, check out the Funeral Cards and Coffin Plates on AncestorsAtRest.com
at June 05, 2017

Very sad that the little card is the only remembrance of little Helen. Hopefully, she will be claimed and loved by her family.