There is a lot of discussion about immigration in America right now. Tempers have flared, and different groups hold various strong opinions.

You will be able to read any you are interested in by using the keyword Immigrant Ancestors. I'm going to share on OliveTreeGenealogy blog what I know of my immigrant ancestors to North America (whether that is USA or Canada)

One of my Dutch immigrant ancestors was Hendrick Meesen Vrooman born ca 1617 in Holland. Hendrick Bartholomeus (Meesen) and 5 children sailed to New Netherland (New York) on D'Eendracht (The Concord) in 1664. 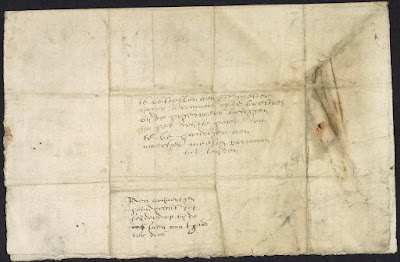 Hendrick was 47 years old and with him were his five children including his daughter, my 8th great grandmother Eva Hendrickse Vroomn. Eva was 14 years old. Hendrick was a widower, his youngest child was only 5 years old. Their ship, De Eendracht, arrived in the harbour 19 July 1664.

Six months after his arrival, Hendrik wrote a letter to his family in Leiden: his brother Jacob, his sister Maartje and his mother Ariaantje. In it he described the new land he has come to, and asked for items from home such as silk thread.

The amazement about the new environment is thus still fresh at the time of writing and some passages of  Hendriks letter state:

It has been a good summer there. Very fine corn has grown there and the cultivation was good and the land still pleases me. At snechtendeel [Schenectady and the surrounding area] the land is more beautiful than I have ever seen in Holland.

Furthermore I let you know that there have arrived three English ships at the Manhattans with soldiers and they have claimed the land and they say that it belongs to their king. And Stuyvesant has given it to them without one shot, with an agreement.


In 1690 Hendrick, his son Bartholmew aged 30, his son Adam with his wife Engeltie and their six children (Barent 11, Wouter 9, Peter 5, Christina 4, Hendrick 3 and a male infant) were living in Schenectady. Then came the Indian and French attack on Schenectady on the cold snowy evening of Saturday February 9, 1690.

On 9 February 1690, in the total of 60 people killed at the Schenectady Massacre, were Hendrick, his son Bartholomew aka Bartol, and two black slaves who were killed and burned by Indians. His two remaining sons, Adam and Jan, were left to inherit his estate. Hendrick's grandsons Barent and Wouter were taken captive to Canada but later recovered. Hendrick's son Adam escaped with his three children Peter, Christina and Hendrick.

The report of the investigating party sent out from Albany states:


Hendrik's life story illustrates the guts and perseverence of the Dutch colonists in New-Netherland: they left their safe home behind and built themselves a new life in a wonderful, but harsh country. 350 years later, Hendrik's letter does not only offer us a unique view of the fortunes of a Dutchman in New-Netherland, but also of the unpolished history of development of a nation. This makes his letter a great ego document to celebrate the Hudson year. (http://hum.leiden.edu/research/letters-as-loot/archive/monthly-letter.html)

The letter is kept in HCA 30-226-1. A first diplomatic transcription was made by Netty van Megen for the Wikiscripta Neerlandica project. The comment on this monthly letter is provided by Judith Nobels. The quotations of the letter have been translated freely. See http://hum.leiden.edu/research/letters-as-loot/archive/monthly-letter.html