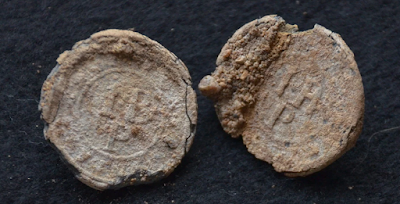 Bones from as many as 11 unmarked graves have been found so far in an empty lot in the Adirondack village of Lake George, 55 miles north of Albany.

Two uniform buttons found appear to be from a Pennsylvania soldier in the 1st Pennsylvania Battalion. It is quite possible that the 11 soldiers died of smallpox at St. George.

Soldiers who went north to fight in Canada in 1776 were sent upon by a smallpox breakout, and were sent back to St. George to recover if they fell ill.

If you had ancestors from Pennsylvania who fought in the Revolutionary War, you might want to Google for more articles as archeologists uncover more details.
at April 24, 2019