James King, Where Did Your 30 Hour Clock Go? 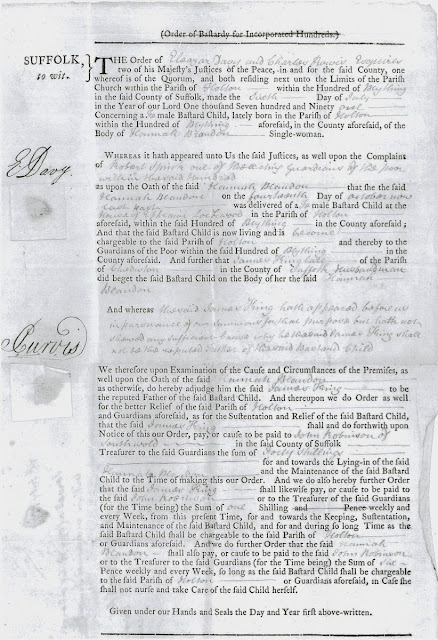 My 4th great-grandfather James King was from Chediston, Suffolk England. He was born circa 1774, and died in 1838 in Wenhaston, Suffolk. Not much is known of James, although I was lucky enough to find Bastardy Papers for him dated July 1791.

In the Bastardy papers he confessed to being the father of Hannah Blanden's illegitimate daughter. Her name was not given in the documents and I've never found out who she was or what happened to her.

Oddly enough he married Hannah on the same day the Bastardy papers were filed.

His two sons Lewis King and Thomas King, were in the group of settlers who immigrated to Upper Canada and started the village of Arkell (now in Ontario). 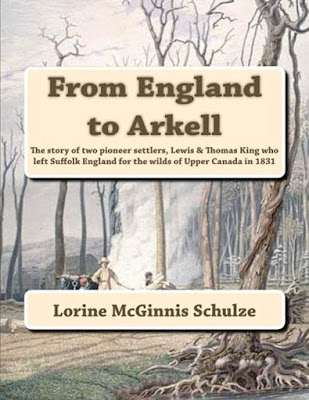 Since writing and publishing a book "From England to Arkell" about this settlement, I happened on a newspaper account for James who died in 1838. His estate was being auctioned off so an inventory was done.

I'm intrigued and fascinated by him owning a 30 Hour clock! That was one of the cheaper types of Grandfather (Long Case) clocks, but still.... a farmer in Suffolk owning such a clock indicates he was somewhat well off. And I would love to know where that clock is now!

The inventory gave me an image of James' home, and helped make him more alive to me as a living breathing person who lived, loved, felt pain and sorry, was loved -  in short, no different from you or I. And that is something that is often lacking in our research - that flesh on the bones so to speak. 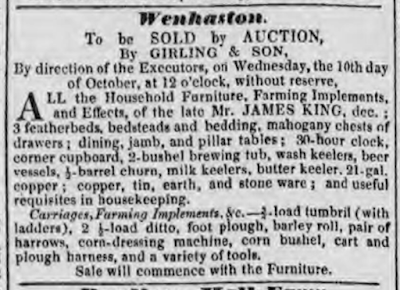 My Kings are first found in Alabama. I am so glad that you can trace and KNOW the origin of your family. The King family is still a vast mystery to me. My ggrandmother Parthena King (Catherine Parthena?)was reputed to be Choctaw and she and her offspring showed that heritage very well.