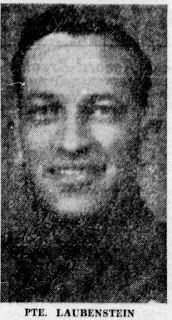 The Department of National Defence (DND) and the Canadian Armed Forces (CAF) have identified the remains of a Second World War soldier found near the Maas River in the Netherlands, as those of Private Albert Laubenstein from Saskatoon, Saskatchewan.

Pte Laubenstein was born in Saskatoon, Saskatchewan, on March 28, 1914, and joined the Canadian Army in 1940. He served with the 102nd Battalion of the Royal Canadian Artillery and the 4th Light Anti-Aircraft Regiment, the Royal Canadian Infantry Corps and the Lincoln and Welland Regiment.

Pte Laubenstein was killed during the Battle of Kapelsche Veer on January 26, 1945, and his body was interred with care in a battlefield grave, which could not be re-located at the end of the war. He was one of 50 fatal casualties suffered by the Lincoln and Welland Regiment during the battle and was 30 years of age at the time of his death.