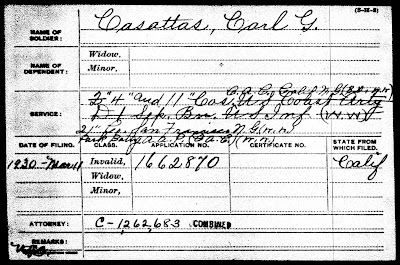 Kevin asked for help reading and understanding a record

My wife's grandfather Carl Gastone Casattas was born 26 Oct 1894 in San Francisco, California, and died 9 Sept 1970 in Santa Cruz, California.  In between he resided for a long time in Oakland, Alameda, California.

Imagine the surprise when we found the attached Index Card in the Civil War Pension file at NARA.  NARA was surprised too!  They said it did not belong and had no idea what it was doing there.


Can you tell us what is says and what it means?  We can find no record of him having military service.

Kevin - All I could find was this reference to C.A.C. being a Common Access Card, the standard identification for active duty uniformed service personnel, Selected Reserve, DoD civilian employees, and eligible contractor personnel.

I see in the 1930 census that Carl was employed by the US Army as a clerk so I suspect the record above has something to do with that. He no doubt needed an Employee ID Card and that may have been the C.A.C. mentioned in the top record. In 1920 he is listed as clerk working for the Government in the Navy Yard in San Francisco.

I think we've solved your mystery. Carl was a civilian employee in a Government/Military organization and as such needed an ID Card.