A Family Abandoned in the Wildnerness

Carnival of Genealogy, 77th Edition is about Disasters. The prompt states "For the next Carnival of Genealogy, tell about a disaster that one or more of your ancestors lived through: Did they survive a hurricane, flood, tornado, train wreck, sinking ship, plague, genocide, explosion, mine collapse, or some other terrible event? How did they survive?"

Anna Maria (Mary) Warner, my 5th great grandmother, was baptised in 1735 in Schoharie New York. She was descended from Palatines who fled starvation and religious persecution in Germany for New York in 1710. In 1757 at the age of 22 she married Isaac Van Valkenburg, descendant of Dutch settlers to New Netherland (and a Mohawk great great grandmother named Lydia Van Slyke)

When the American Revolution broke out in 1775, Mary and her husband remained loyal to the King even though Isaac’s father was a Patriot,

Isaac was imprisoned in Albany three times by the Americans for his loyalty to the British King. After his release in 1777, Isaac joined the Loyalist unit Butler's Rangers and fled to Canada. Mary was left with ten children ages 2 to 18 years.

Mary continued to aid the British, and in 1779 she and the children were taken from their home at North River, New York, by American patriots. Their home and all their clothing and belongings were burned by the patriots. The patriots then forced Mary and eight of her children (two of her sons ages 14 and 18 had already joined their father in Butler’s Rangers) to march 80 miles north through the forest. There they were abandoned by the Patriots and left to die. Mary’s youngest child was only 4 years old. 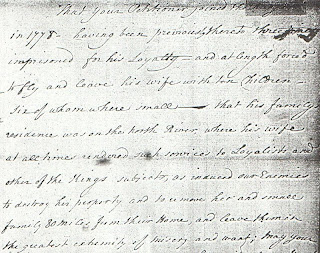 An excerpt from one of the affidavits presented to the Council when Isaac petitioned for his land grant in 1797 briefly describes Isaac's imprisonment and Anna Maria's ordeal.

Luckily friendly Indians found the family and took them to Montreal where they joined Isaac and the other Loyalist families who had made it to safety. In Montreal, the starving Loyalists were given food, blankets and minimal clothing. The British government had not made provisions for so many Loyalists’ families arriving with nothing but the clothes on their backs. For 5 difficult years the Loyalists and their families were quartered at a small barracks and given a meager allowance of food rations, blankets and clothing by the Government.

But the family survived, and Mary with Isaac and 9 of their children agreed to join other Rangers and families who were promised land in the Niagara area of Ontario. In April 1784 the family arrived at Niagara, where they would make their home. Rations were still dispensed to the settlers as after 5 years of living with nothing to call their own, they still had no land, and no homes. Again they were quartered in barrack style living and so they began to build their own shelters on land that was not theirs.

A descendant of one of the refugee families states that the family dinner-table was a huge stump, hewn flat on top, standing in the middle of the floor. When their clothing wore out, the settlers made new garments from deerskin.

They also had yet to endure (and survive!) what became known as “The Hungry Year” in 1787 In that year the government stopped giving out food rations. But there was a drought, then a freezing winter, and no grain crop or supplies. Many families had neither guns nor powder to shoot what game was near. Many starved that winter in Upper Canada (Ontario). The Loyalists and their families were reduce to eating leaves and drinking water which had been boiled with a bit of bark in it. Mary’s oldest son soon gave up and returned to New York where he married and raised his family.

And yet Mary and her husband and children survived. They suffered one trial after another – the free land promised had not been forthcoming and had to be petitioned for. That meant writing out lengthy pleas stating the reasons why they felt they were qualified to receive the land. Statements and affidavits had to be gathered from those who had known them back in New York (or wherever they once lived)

Loyalists and their families had to present their petitions for free land to the Council where they were read and then a decision made. Even if a Loyalist received his grant of land it was not likely to be the land where he had begun building his new home. Families were often separated and older men who had counted on their young sons being next door to help them clear the land and farm it, were suddenly on their own. Their sons might be hundreds of miles away.

Life had been a struggle for Mary and her family from 1775 until 1797 when she and Isaac were finally granted their 500 acres near what is now St. Catharines Ontario. 22 years of hardship, danger and starvation – far from home and with family left behind. How many of us could (or would!) endure that for the sake of remaining loyal to a distant ruler? I admire Mary and Isaac and all the Loyalist families tremendously for their courage, their spirit and their refusal to commit what was in their minds, an absolute betrayal to King and country.
at July 30, 2009