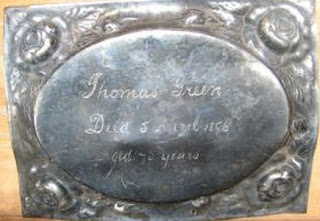 The history of Coffin Plates or casket plates is a long but not very well documented one. Coffin plates are decorative adornments that contain free genealogical information such as the name and death date of the deceased.

Brian Massey of AncestorsAtRest.com has a very large collection of coffin plates online. There are over 500 individual coffin plates on Brian's website and they are all free for visitors to look for a Coffin Plate of an ancestor.
at July 09, 2009