Gregorius Wildbore. It has a certain strength when you say it out loud. I imagine the man who had this name bestowed on him - strong, tall, a brave warrior...... but in all likelihood he was short, thin and stoop-shouldered from years of toil.

Gregorius was my 11th Great-grandfather on my maternal side, and he was born ca 1550 in Kent England, probably in Thanet. I suspect he was a farmer, struggling to grow a few crops in the tiny parish town of St. Mary Minster, for that is where he married, raised his 7 known children, and died in 1606.


I am lucky to have found a copy of Gregorius' will but it is not easy reading. In the will he is named as George Wildbore which is a bit of a letdown from the romantic notion of a strong and regal Gregorius. But reality is reality and I know that Gregorius was just the Latin rendition of his very ordinary name.

Larger PDF file is available for anyone wanting to give reading his will a try. The bottom section of the will is  here 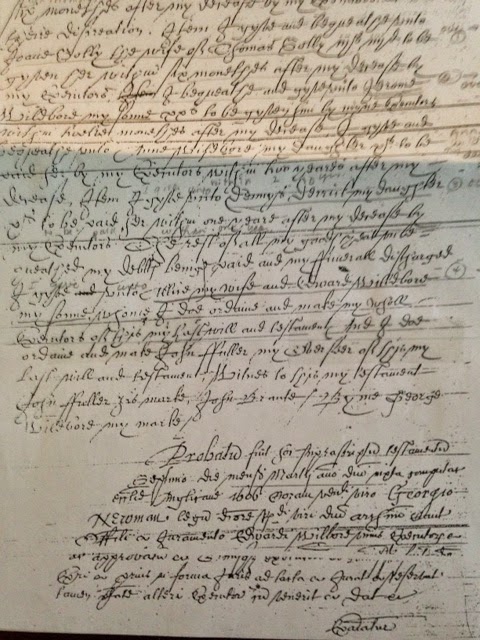 In his will, which I have struggled with for many years, I have only been able so far to read "Alice my wife and Edward Wildbore my son" (Edward, who was baptised in 1580, is my 10th great-grandfather) and "Joan [Colly?] the wife of Thomas [Colly?]" and "Jerome Wildbore my son".

Perhaps one day I will be able see the original again instead of the print I made from the original microfilm where I first found the will.

I spent time last week searching online church and parish records for Thanet Kent and have had fun and success (a good combination!) with my mother's British roots. Her family lineage goes back to 1500s Ramsgate Kent area for the most part and I have not done a lot of research on them before. It's a good feeling to organize my notes from years past and acquire copies of original cerificates to add to a book I am putting together for my children.

It is fascinating to me to learn that Minster in Thanet originally started as a monastic settlement in 670AD. The parish church of St. Mary-the-Virgin was built during Norman times. It is quite possible that my ancestors go back to this time. I have literally dozens of surnames of ancestors who lived and died in this small area from at least the early 1500s to mid 1800s.

Not much housework or mundane chores are getting done this week in our household as I am treating myself to a week of genealogy research right here at home! If you have not done this I urge you to set aside a few days or a week and devote yourself to organizing your previous research and looking for new items to add to your tree.
at October 28, 2014

So where does his name appear as Gregorius? Other records besides the two posted here? It looks like both the records here have Georgius. I'm not sure about early modern English naming principles, but Gregorius and Georgius are not variants. They are both Greek in origin: georgios="farmer," and the verb gregoreo="to be watchful, vigilant," so as a name Gregorios would be "watchful one." So I wouldn't think he would be referred to by both of these names, since they're different, would he?

Also I thought of giving it a shot to read the will images, but the file size was too small to get a readable image.

Justin, thank you so much for taking the time to alert me to my error. I will have to find the one record that names him as Gregorius and verify that I didn't goof. I may have as it was an early record I obtained over 30 years ago when I was not as careful as I hope I am now.

I would be very happy to email you a copy of the will or to upload a larger sized one on my website if you are willing to take a shot at it. I am sure there are others who could read it where I have struggled and not been able to do so.

A Larger PDF file is available for anyone wanting to give reading his will a try. The bottom section of the will is  here

Thanks Lorine! I'll download it and give it a shot.

Hi Lorine, discovered a couple of months ago George Wildbore seems to be my 11 x gt grandfather too! I expect you may have a transcript of this will by now? If not I have a transcript on my website, also to George's probate inventory - see links from his page at http://teresa-goatham.me.uk/genealogy/getperson.php?personID=I29666&tree=tree1.
A quick read through of the image you have and I didn't notice any significant differences to what I have, which is an image of the original. Spellings are quite different though - far more standard in the register copy, so if you have any trouble reading read it out aloud. (I can't read without doing that in my head anyway, but I know some can and find reading oddly spelt harder).

From George I descend thro' Edward, Nicholas, Thomas, Hannah Wildbore and then Philpotts. My concern in this is Thomas - seems to me likely to be son of Nicholas and Dorcas given tha he named a daughter Dorcas (after one after his wife and then her mother) but have you come across any firmer evidence? I wasn't so concerned until I found a Thomas a few miles away whose fate I don't know - baptised in Whitfield in 1640 so just the right sort of age - descendant of George's son Jeremy. Have you looked at that line and been able to exclude him?

I look forward to hearing from you.
Teresa

Just saw your comment. What a great site you have! I'm happy to share what I have on the family, but I think we have the same or you may have more. I did notice on your site you have a link to George's Inventory but the link only takes you to his will.

I don't have his inventory - would you be willing to share it? My email is olivetreegenealogy@gmail.com

I have not found anything else re Thomas.