﻿
Several years ago I purchased a tiny diary kept throughout 1914 during WW1 by Ada Harland. Ada lived in Falsgrave, Scarborough, Yorkshire England and wrote in her little book almost daily. The 3x2 inch book is difficult to read as Ada was a prolific writer and crammed as much as she could on to each page.

Along with the diary was a photo of Ada and a letter dated Dec. 31, 1914 from "Bertie" in Salisbury Plain England. Bertie was with the Princess Patricia's Canadian Light Infantry (PPCLI). Ada and Bertie eventually married.

I did some genealogy sleuthing and found that Bertie was born Herbert Ashby in Scarborough Yorkshire England to parents John & Elizabeth. At some point Bert left England for Canada because in September 1914 he enlisted in the Canadian Army to fight in WW1.

Bertie and Ada were married in Yorkshire England in the first quarter of 1919 and in the fall of that same year Ada sailed to Canada on the ship Scandanavian to join her husband in Vancouver B.C. 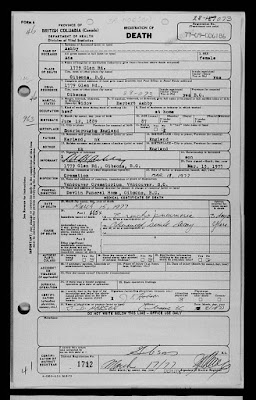 One son Henry was born to the couple around 1920. In 1935 Henry and Ada can be found on Ships Passenger lists sailing to England in June and returning to Canada in August. Ada noted that she was going to Falsgrave Road in Scarborough so presumably they were visiting family and friends. 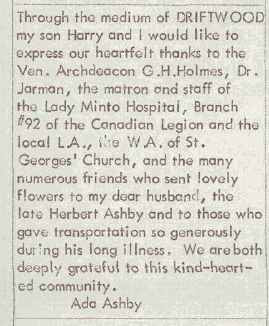 This sounds fascinating. Herbert Ashby's full service record is online at the Library and Archives Canada. His regimental number is 16858. He is listed in the book: List of Officers and Men serving in the First Canadian Contingent of the British Expeditionary Force, 1914 which is online at Internet Archive (on page 96). He was with the 7th Battalion (British Columbia Regiment), 2nd Infantry Brigade in "F" Company when he enlisted. He returned to Canada on the ship Orduna in May 1919 and is listed by H Ashby on the manifest at Family Search. Ada was fortunate to travel to Canada on the Scandinavian in October 1919. Earlier sailings of this ship encounters numberous difficulties especially in January 1919.

What a wonderful find,and enhanced by the lovely photograph of Ada.

I have my paternal grandmother's diaries from 1903 through 1906, and they are also very informative. During that time, she worked as a maid/dressmaker; then accompanied her tubercular sister to a Saranac Lake care cottage, where I think she worked to help pay for her sister's care; mentioned that she had taken the horse and carriage to town and had an accident; then met my grandfather and mentioned amazingly briefly "We got married today." She listed all the letters she had received and written, and also where she traveled.

She was born in England, moved to Canada at age 4 months, but the diaries were from her time in the U.S., where she lived the rest of her life. I got quite a bit of genealogical information from the diaries, even though they were the "I got up at the usual time and did the usual things" kind of writings.