How the 'Mother's Curse' Came to Canada 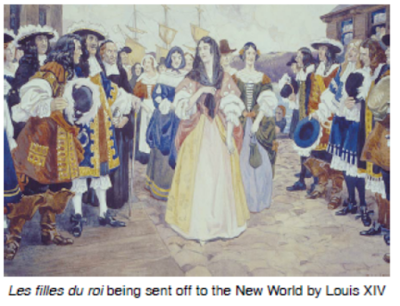 Do you have a Filles du Roi in your ancestry? I do, and my daughter-in-law does too. My Filles du Roi is my 8th great-grandmother Claude des Chalets (ca 1651 France - post 1706 New York). Claude "Blandina" was one of three orphaned sisters who were sent to Canada as a "Filles Du Roi"(King's daughters).

The Filles du Roi (Daughters of the King) were impoverished or orphaned women who were given a dowry by the King of France if they agreed to go to New France (present-day Quebec) to marry and help colonize the land. Over 800 of these women left France for New France.

With them they brought mutations in their DNA - some common, some more rare. Thus descendants of these Filles du Roi stand a better than average chance of inheriting a rare genetic disorder. According to the article

"One of these is Leber’s hereditary optic neuropathy, which causes vision loss, usually in young men. Recently, geneticists using French Canadian genealogy have reexamined the effects of Leber’s and found a striking pattern of inheritance: It seems to show a long-theorized but never-seen-in-humans pattern called the “mother’s curse.”"

Continue reading this fascinating article How One Woman Brought the 'Mother's Curse' to Canada
at October 27, 2017