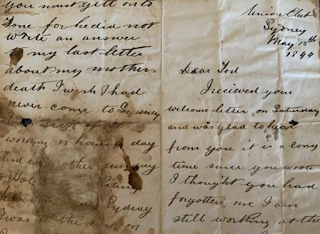 "A letter written in 1894 and found between the linoleum and floor boards of a house being demolished to make way for Hobart's State Library will finally be returned to the author's family." ABC News

The letter was written by Sidney Hulbert on May 13, 1894 while he was in Sydney Australia and was found by Rex Nightingale during construction. He held on to the letter for 60 years and then turned to Social Media to find descendants. After being posted to ABC Facebook pages in both Hobart and Sydney, the letter was identified by its author's grand-niece Robyn Lobb.

Continue reading 125 year old letter found under floor to be returned to writer's family after social media search
at September 18, 2019