A Genealogy Board Game For Children: Part 2

The next thing I did after making my blank squares was to think about what text I would have on those squares. What would happen when a player lands on each square? Would they have to pick a card from a Reward/Punishment pile? From a Transportation Pile? Or would there be text printed right on the square with some action they had to take?

I had some ideas for the squares along the outside edges but wanted to also figure out what to do with the 4 corner squares. Would I create a type of detour, sort of like the sliders in Sorry? Or would I create physical detours, a path that diverted from the main squares and had something to do with an ancestor?

As an example, I could create a path with stickers (little footprints)  called Northern New York Forest Trail. It would be the path taken by their ancestor Mary Vollick during the American Revolution when her home in northern New York was burned by the Americans and she and her 10 small children were marched into the woods and left there to make their way to Canada or die. So a player landing there would have to detour through this path to go with Mary and her children to safety in Canada.  I played around with this for a bit but didn't create it. Instead I decided that each of the 4 corner squares would require the player (if he/she landed there) to join an ancestor in a War.

You can see the 4 War Corners here as well as the War Areas where the player sits out a few turns. 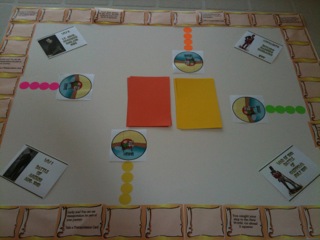 So one corner square is the American Revolution which three of their ancestors fought in on the Loyalist (British side) and one on the Patriot (American) side.  The square says

"The American Revolution has broken out. You enlisted with Isaac Vollick in Butler's Rangers. Go to their barracks to get your uniform and miss 2 turns then return to this square"


American Revolution
Butler's Rangers Barracks
1777
The other 3 corner squares represent War of 1812 (another ancestor fought in that one), WW1 and WW2. All of these saw our ancestors fighting and so each square talks about something specifically related to that ancestors. The War of 1812 square allows the player to make a choice - either miss 2 turns to join Stephen Peer at the Battle of Chippewa in 1814 or pay another player to take their place. 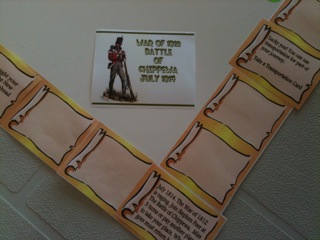 I thought this would add an interesting twist to the game. Here the player who landed on the square can negotiate with other players. They will want to offer money to get another player to sit out 2 turns in the War of 1812 square. It should be interesting to see the bartering that takes place!

WW2 is about my father who was a Lieutenant in that War. Again, the player who lands there has to miss 2 turns.

Each corner square has a respective larger square turned kitty corner to the War Square. It contains a photo of the soldier in that specific war or representing that soldier, as well as a brief descriptive title. That is where the player sits out their turns while waiting to rejoin the game.

What fun! I'm in the process of developing a Genealogy for Children session for the library and I really appreciate all of the ideas you have!